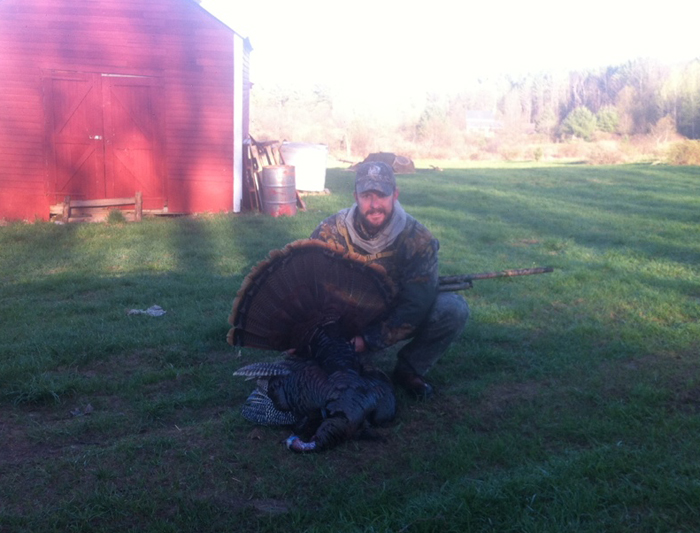 [Editor’s note: Here’s a great story from our colleague Scott McEnaney to kick off our 2014 turkey-season coverage.]

I am one of those people who tends to immerse himself in something once I start it. I got a taste of turkey hunting from a friend who took me out on a mid-May morning. He put about five jakes in front of me and I was paralyzed. From then on, I was ruined.

I spent all of my waking hours scouting, walking, snowshoeing, knocking on doors asking permission, and even…calling. I listened to CDs, I watched videos by YouTube “experts,” and I sought advice from friends. I was bound and determined to get the mouth call down. At the time, I thought of that as the pinnacle of turkey-hunting skill. A mouth call was what all the good hunters used, so that was my only concern. I now use all calls, but at that time, I was obsessing about the mouth call. Sounds of shrieks, sqeaks, squawks, nails on a chalkboard filled my house. I was even sent to the back porch by my wife…only to have the neighbors stop and stare. I didn’t care. I was going to get it.

At an event where we were messing around with the mouth calls, I let my inhibitions down in front of two of my co-workers and let a few rip. They didn’t say anything. No constructive criticism, no tips, no nothing. I know now they didn’t want to hurt my feelings. Anyway, a little later on, I busted them talking, laughing, and poking fun at how awful my calling was. Words can’t describe how pissed I was. First, they were friends. Second, they didn’t offer anything constructive to somebody who was not the “expert” they were. Given that, I threw a tantrum, told them they were jerks, and let them know I would show them.

But how? The season was only three days away, and I was in Montana right up until the opening morning. How was I going to get to practice? The only real way to show them was to actually shoot a turkey, which I had yet to do. Calling a friend to take me out wasn’t an option. For me, turkey hunting isn’t a team sport. I like calling the shots, being nimble, and not having to give directions to anyone other than myself.

I went out on opening morning with a lack of confidence. I got up at three, went for a nice long hike up on a ridge, and waited for a gobble. It was cold, about 18 degrees, and not a sound to be heard. I waited. . .nothing. Waited some more. . .still nothing. Finally, the sun came up and warmed up the morning, and I heard a gobble off in the distance. I moved down the hill and saw through the woods a blue head and body in full strut walking toward me from about 200 yards away.

Afraid of what the response might be, I sat down and let out a soft yelp. He responded! I waited a few moments, and did the same thing again. Same result, only closer! I had heard that keeping quiet is as important as calling, so I waited about five minutes (more likely it was two minutes, but it felt like five) and called again. The most thunderous gobble I have ever heard was right over the hill from me. First, I saw his fan. Then I saw his head. He came up over the ridge drumming at about 20 yards and left strut. I shot. My first bird—20 pounds, 8.5 inches on the beard, and 3/4 on the spurs—was in the bag.

The office culture at Orvis is all about turkeys in springtime. In May, the first 45 minutes of the day are about telling the stories of the hunt. I recalled one of these stories where one guy was talking to the next guy about a third guy. He said, “Steve got two birds; he is so lucky.” The other guy said, “One bird can be lucky, but two birds require skill.” 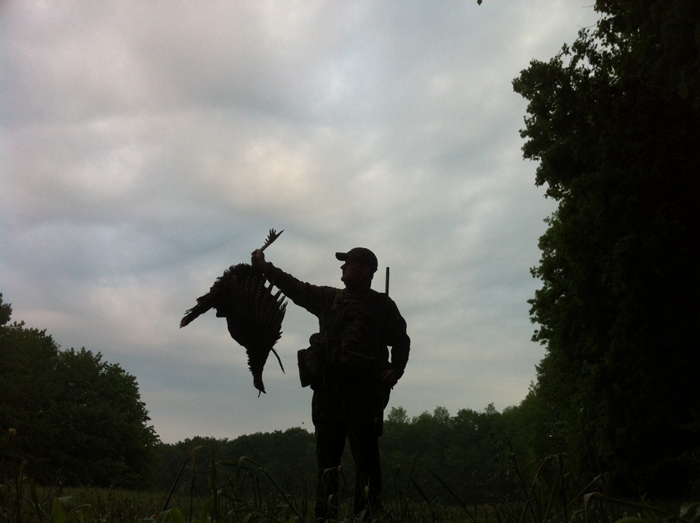 The glory of a May morning and the thrill of the hunt keeps him going back.
Photo courtesy Scott McEnaney

I wanted to rub my first turkey in the faces of my hecklers, but being mindful of being called “lucky,” I instead sent a picture and short story, and I made sure they were on the recipient list.

Sixteen days passed, during which I had some great hunts. I got more confident in my calling and was feeling pretty good about what I was doing. Soon, I was hunting “a bird” not “turkeys”—I tried to pick a single bird and get him. If he beat me, that was fine…I would try it again the next day.

I headed across the border to New York on the 17th of May to hunt a bird I had been chasing. I brought one of my hecklers along and sent him to a different ridge. We would hunt the morning gobble and meet up at the truck after it was over. I could write an entire story about the bird I was chasing, but I will simply say he gave me an unbelievable show and I ended up getting him to come within range. Bird number two—20 pounds, 9.5 inches on the beard, and 1-1/8 on the spurs—was in the bag.

One minute after I shot, I got a text from my partner that said, “Did you shoot?”

I wanted to say “All with my mouth call, sucker!” But I didn’t. On the way to the office he said, “Wish I had been there to watch that, maybe I would have learned something.” I didn’t say anything.

I ended up with one more bird that season, my second Vermont turkey. I didn’t win our office turkey pool that year, but it was close. I never had to say anything to those hecklers. The one who had come with me that day said to another guy in my presence, “I feel bad for the turkeys.” He went on to say, “None of them are safe because we motivated Scott so much that he will not stop until he shows us that keeping our mouths shut would have been a good idea for the area turkey population.”

That was seven years ago. I have been “lucky” enough to get many nice Toms in that time. I am not sure what motivates me these days; probably the beauty of a May morning in Vermont. Well, that and taking youth hunters out. I suppose it happens to everyone: getting somebody else excited about the hunt is as important as being excited about the hunt. One thing always tell these youth hunters is “don’t ever let a human tell you that you don’t sound enough like a turkey.”

Scott McEnaney is a native Vermonter and is Orvis’s Easter Director for our Endorsed Lodges, Outfitters, and Guides (ELOG) program.

3 thoughts on “When It Comes to Turkey Hunting, Proving Naysayers Wrong Is a Powerful Motivator”