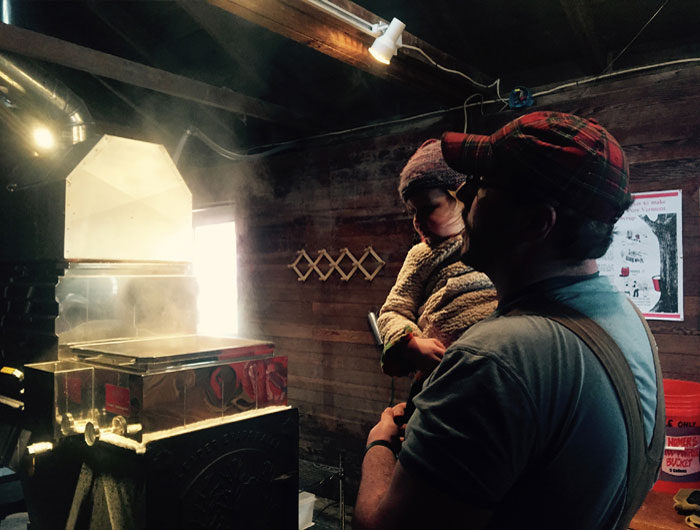 The author, Michael Gardner and daughter, Edie, spend an afternoon in the sugarhouse.
Photo by Kendra Gardner

With Vermont’s Maple Open House Weekend approaching on April 2 and 3, it seems prudent to offer our non-native visitor and sheltered locals a brief guide to maple syrup.

First and foremost, syrup does not flow directly from maple trees. Trees produce raw sap, which must be concentrated to become maple syrup. The trees must be tapped to access this sweet sap. (If done correctly, it does not hurt the trees.) The actual tapping of the trees is purely a matter of timing—trees won’t produce the correct type or quantity of sap year-round. For syrup production, maple trees must be tapped during a period of freeze-and-haw cycles. This happens twice a year in Vermont, in the spring and again in fall. While you can make syrup during both seasons, spring has proven to be the most productive. Harvesting sap during both seasons doesn’t allow the trees to heal fully, and we all know that fall is hunting season in Vermont, so one must prioritize. 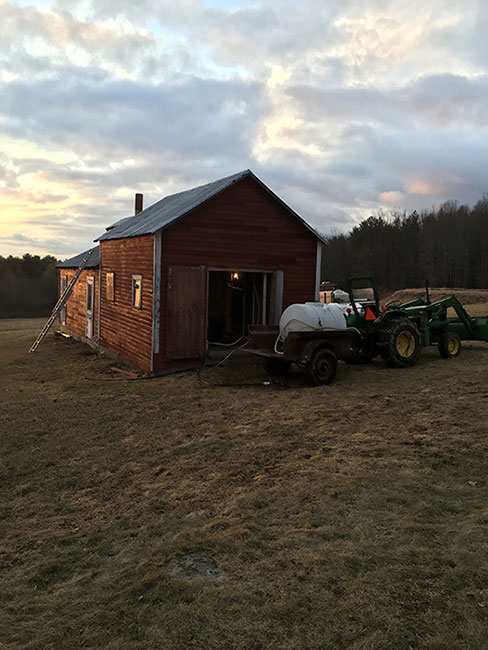 The sugar house (usually shrouded in snow in winter) with a fresh delivery of sap from the tank
on the back of the tractor. The farm’s sugar bush can be seen in the background.
Photo by Lucinda Jamison

Once the tree is tapped, the sap flows straight from the trees into traditional galvanized buckets or more currently, through a maze of plastic piping into larger holding vats. At this stage, the sap contains only about 2% sugar. To be called syrup, the sugar content must be brought up to 66%. To increase the sugar content, excess water must be removed from the sap. It typically takes about 42 gallons of sap to make a single gallon of pure maple syrup. Occasionally, if the maple sap is running with low sugar, it can take upwards of 60 or 70 gallons. Despite years of intensive study, it has been irrefutably proven that cussing, no matter how loud or colorful, does not cause an uptick in the sugar content.

You should know that every sugar maker has a sugar bush. This isn’t a magical bush that sugar makers worship. In fact, it isn’t a bush at all. Instead it’s the orchard of maple trees from which they collect their raw sap. There are several different types of maple, and they can all be tapped to produce maple syrup, though with varying degrees of success. This list includes sugar maple (sometimes called hard or rock maple), red maple (often called soft maple), silver maple, and even box elder. The sap from silver maple and box elder has very low sugar content, often below 1%, so these are usually skipped by producers. The tapping of red maple digs at the heart of a great controversy in the industry. Some producers tap them with great success, while others would rather sell their truck with both their spouse and favorite dog in the front seat than be caught dead tapping a red maple. The science suggests that red maple can be just as productive as sugar maple, though for a slightly shorter season. 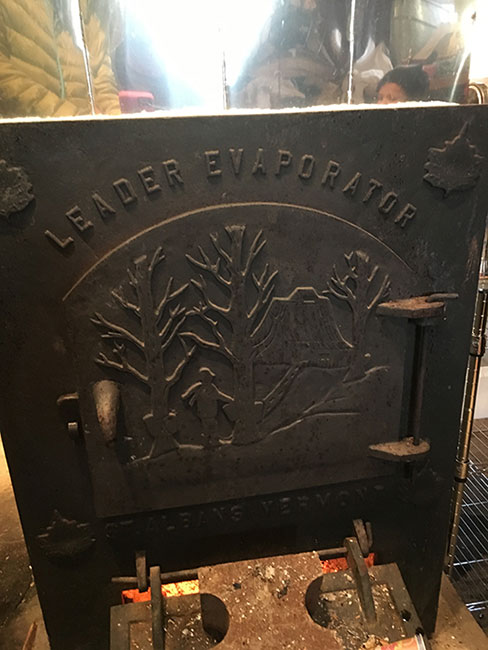 The evaporator, the engine that runs the sugaring operations, is the heart of the sugarhouse.
Photo by Lucinda Jamison

Once sap arrives at the sugarhouse, it begins an extensive transformation into the syrup that we love. The raw sap flows directly into an evaporator. The evaporator is truly the showpiece in most sugarhouses—the gleaming stainless steel, the carefully crafted design, and the never-ending hunger for more fuel. It’s the maple equivalent of a classic 400-horsepower muscle car. An evaporator running at full boil is a thing of beauty. It is also hot—very hot. Standing too close to a traditional wood-fired evaporator has led to many glowing-red faces in February. What I learned was that, while it seems obvious, metal heats up faster than denim. When warming one’s derriere near the evaporator, one should also realize that metal items such as buttons or zippers will be absorbing that heat at a hypersonic rate until they reach near-nuclear hotness. This is the point where a sugar maker’s jig begins, usually followed by some snow shoved down one’s pants, and culminating, minutes later, with a red-faced explanation for the large wet spot to the new people streaming into the sugarhouse.

Moving on. When the raw sap has been processed to 66% sugar, it is ready for filtering and bottling. In its final form, syrup can be different colors, and have different degrees of maple flavor. Syrup is graded according to light transmittance and flavor, not a reflection of quality. The lightest in color and flavor is generally called light amber (“fancy” in Vermont), then on to medium amber, dark amber, and grade B. Unfortunately, Mother Nature controls ninety percent of the factors that determine syrup color and quality. As much as we’d love to make light syrup for your hyperactive niece and dark syrup for your brother, we can’t do both at the same time, and we can’t do either at our discretion. 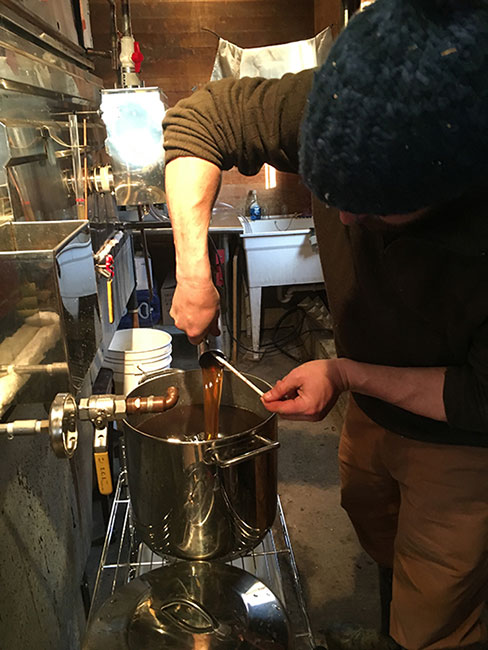 Scott McEnaney, Orvis Manager of Schools and Endorsed Services, and Michael’s sugaring
partner, pours off syrup from the evaporator to begin the filtering and bottling process.
Photo by Lucinda Jamison

If you are making your first trip to a sugarhouse, you should buy a smattering of each available grade and decide exactly which you like best. Just as I like a heavy smoke flavor on my bacon, I like a heavy maple flavor in my syrup, which translates to a grade B gracing the door of our refrigerator, where it sits next to my wife’s medium amber. The production of maple syrup is still very much a local operation, with local flavor, and made by local characters.

The Maple Open House Weekend throws open the doors of Vermont’s sugarhouses to any who would like to visit, buy syrup, or just learn more about the process. It is a great weekend for a family trip, a local adventure, or even a statewide tour. You will meet some real Vermont characters, and have a chance to sample some very fresh pure maple syrup. Now armed with the basics, I hope to see you out there. For more information, please check the Pure Vermont Maple website or visit us at Wing Farm.

Michael Gardner is a financial consultant most of the year, but in the spring you’ll find him in the sugarhouse at Wing Farm in Shaftsbury, Vermont. 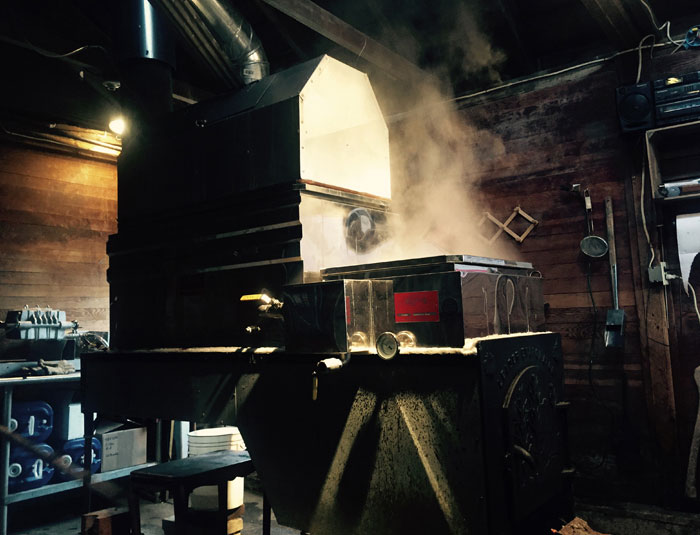 Steam off the evaporator is a constant presence in the spring sugar house.
Photo by Lucinda Jamison

One thought on “An Afternoon in the Sugar House”