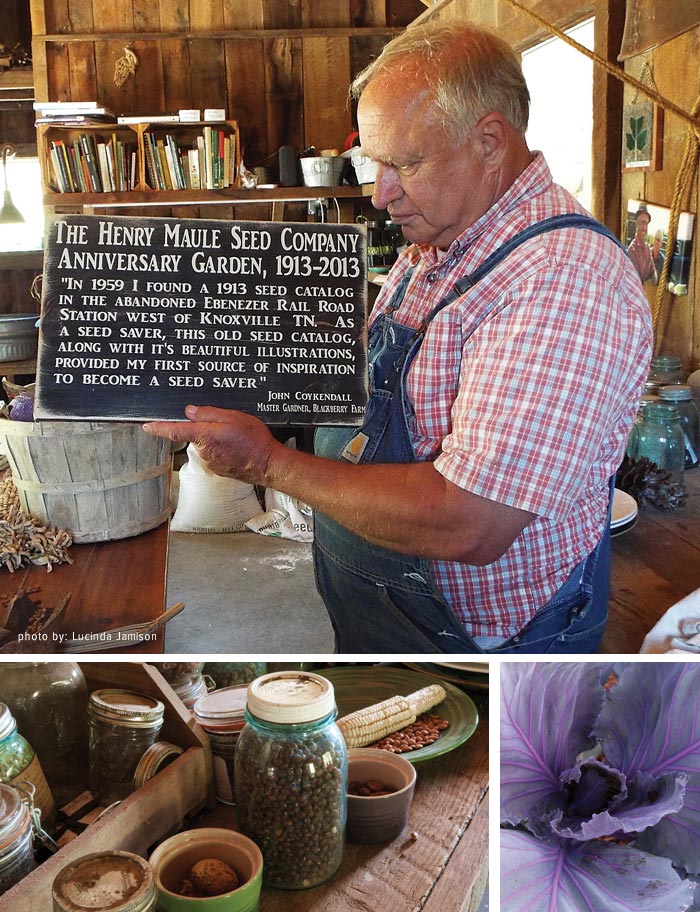 Fall in Tennessee is a vibrant artist’s palette. A blaze of bright hues burnishes the hill, and even the trees have colorful names—red maple, yellow buckeye, black cherry, blue beech. Flashes of brilliance flit by as the brightly feathered cardinals and tanagers, bluebirds, and goldfinches dart among the trees and shrubs. Everywhere you look, nature’s bounty is awash in color… pumpkins in every shade of orange, coppery persimmons, red apples, bronzy-gold scuppernongs, wild purple muscadines. It’s a moveable feast for the senses.

Tucked away in a misty hollow (called a cove thereabouts) in the foothills of the Smoky Mountains, Blackberry Farm  is a hidden treasure, a culinary mecca, and all that the label “agrotourism” would aspire to imply. The farm is a series of sublime adventures passionately provided by experts. It’s a team of liveried servers delivering a homey grits-and-farm-cured bacon breakfast with sterling-silver cutlery wrapped in a Frette napkin…a former elephant trainer who now trains a rare, 800-year-old breed of Italian water dogs to hunt prized Black Perigord truffles…a master gardener in dusty denim overalls who is a classically trained artist, as well as one of the world’s foremost experts on heirloom bean varieties.

The farm is a distinctly American experience firmly rooted in the rolling foothills of the Smoky Mountains. The land where Blackberry Farm stands has provided for its inhabitants from the Cherokee to the first Appalachians to the current residents and guests at the Farm. And many of the staff are local folk bringing generations of regional Appalachian history and food lore to their pursuit of creating a culinary retreat, with regionally-inspired food trademarked by the Farm as its own Foothill Cuisine®. A visit to Blackberry Farm is as much an unforgettable vacation as it is a workshop in how to live and eat, with lessons that will stay with you as long as the memories you make. As Jim Sanford, Elephant-Trainer-Turned-Truffle-Dog-Trainer told me, “Excellence is lowest bar we have.”

My experience at Blackberry Farm was one rich with storytelling. Every conversation was brimming with anecdotes about the place, about its unique culture, its time-honored traditions, and the history of the Appalachian foothills. These narratives drew a sketch of an Eden with a passionate dream-team of artisans who guide the spirit and sensibility of life in this American utopia.

On a sunny afternoon, I wandered down to the gardens to meet up with Master Gardener John Coykendall. A master in his fields and a master raconteur, Coykendall holds court in the FarmStead, a dirt-floor outbuilding complete with a potbelly stove and a couple of well-worn rocking chairs. Vintage-looking handtools hang on the walls and strands of drying leather-britches beans are suspended from the rafters, along with sinuous dipper gourds. We settled back in the rockers as he described his love for the region and its agricultural heritage. 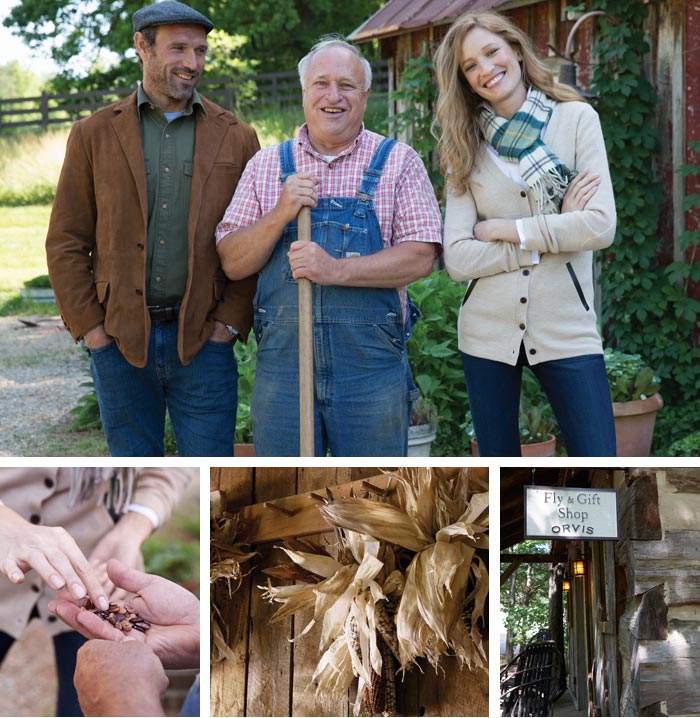 “Don’t forget, I’m 73 years old,” he said. “So when I was a boy, I was talking to folks born in the 1800s who still had the old knowledge. Knowledge that is far more practical than modern agriculture. I wanted to be around the old people and learn from them. They knew how to take care of the soil, how to save seeds, and I wanted to learn that.”

Wanting to preserve this rich history, Coykendall set out to save the seeds of the food that defined the region. To date, he has saved more than 500 varieties of seeds, making him a hero to the American heirloom seed community. He led me to a weathered wood-plank table and showed me a selection of beans separated into colorful piles.

“See these? These are red calico beans from right here in Tennessee and they date back to around 1794.”

He pushed some gorgeously hued pink beans with a splash of white around the “eye” toward me.

“These are called Snow on the Mountain—see how they look like a snow-capped mountain with that white there? They’re a rare variety of the Lima family, go back to about 1840 or so.”

He gestured to another rather lumpy, dull reddish-brown bean.

“These are from the Thomas Jackson farm down in Georgia and they’re from around 1894 or so. They’re a butter bean, which is another name for a Lima bean, but mostly we call it a butter bean around here.”

He went on to chronicle the start of his life’s work preserving heirloom vegetables.

“In 1959, I was exploring the abandoned Ebenezer Train Station in west Knoxville and I came across a dusty old stack of train timetables and schedules and in that stack was an old copy of a 1913 Wm. Henry Maule Seed Catalog. I was struck by the drawings and the descriptions of the seeds.” 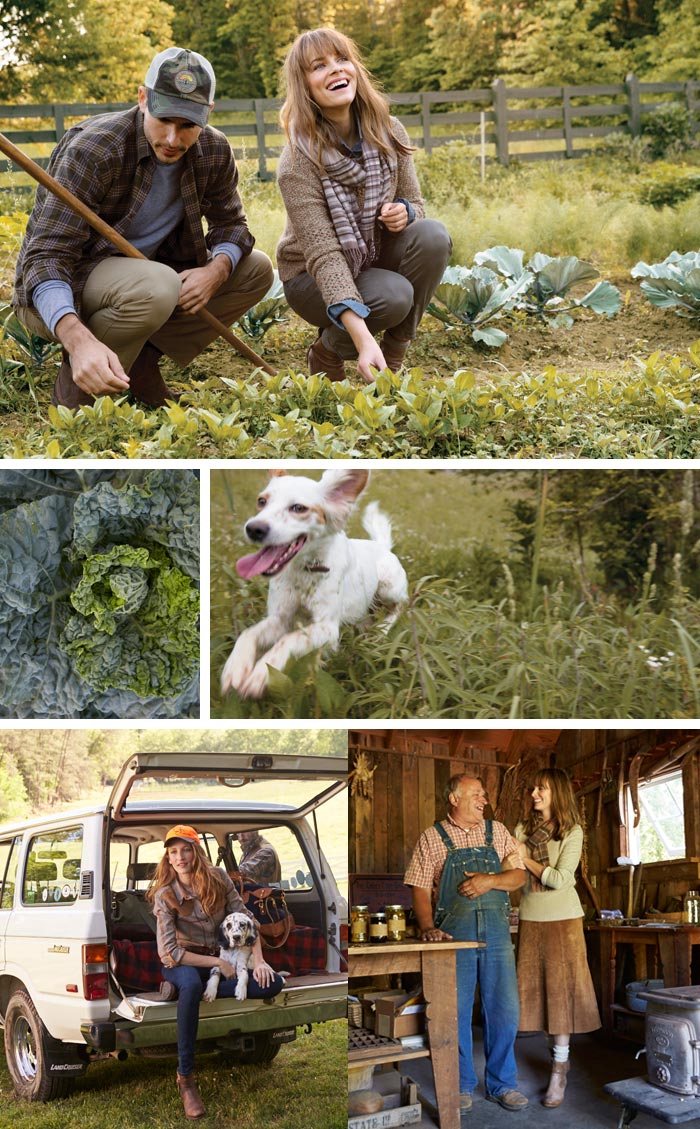 Then he told me about his favorite variety from that tattered catalog, the Tennessee Sweet Potato Pumpkin.

“It doesn’t look much like a pumpkin at all! It’s kinda bell-shaped and has a big long neck on it, and it’s green-and-white sort of striped.” He spent decades tracking down this particular variety, finally finding it in 1991 through a network of seed-savers and heirloom gardeners. “I couldn’t wait to get those seeds in the mail!” he says with a glint in his eye. “I had a feeling it would make a heckuva a pie, and I’ll tell you, it does!”

So, like Eden, it all begins in the garden.

Or, under it, as the case may be. Garden Manager Jeff Ross took me on a walk through the Farm’s European hazelnut orchard, where, in the rich, loamy ground beneath, a matrix of roots is quietly growing the soon-to-be-matured subterranean truffle crop. With a soil pH-acidity and climate perfect for nurturing the prized Black Perigord Truffle, Ross and the other gardeners have been carefully tending this orchard since 2006, waiting patiently the 8-10 years it takes the truffles to mature. (This plantation of truffle-inoculated trees gives purpose to the adorable Lagotto Romagnolo truffle-hunting pups.)

A direct descendant of the revered Cherokee Chief John Ross, Jeff Ross has an instinct and a dedication for this land that shines through his words like a beacon. He told me about saving three American persimmon trees in the center of the orchard when it was thought to be an overgrown thicket worthy only of removal. He told me about the border of sunflowers that were being planted along the fence to lure the Japanese beetles away from the hazel trees (they like fuzzy leaves to cling to). We sat at a picnic table in the shade and the conversation flowed on from the sunflower border to talk of how sunflowers existed here for centuries before any other food was cultivated. He told me how the Spanish explorer Hernando De Soto came to Tennessee around 1540 and found the native peoples eating a form of edible sunflower tuber. How some of the Spaniards took these plants back to Europe where they became popular, and were misnamed Jerusalem artichokes. He talked about eating American history and described the Cherokees as the “original foodies.”

From these passionately focused individuals, and others I met at Blackberry Farm, I discovered the true meaning of the word idyll. I came home with a profound sense of wonder and relief that places like Blackberry Farm exist. Places that protect, cherish, and preserve the heritage of a region while adding something so truly exceptional to the celebration of that heritage. I came home with a fresh eye to our own regional recipes and rituals. I came home, pulled out my spring’s cache of heirloom seed catalogs, and started planning a whole new set of bean crops for my spring garden.

One thought on “Blackberry Farm II: An Adventure for the Senses”