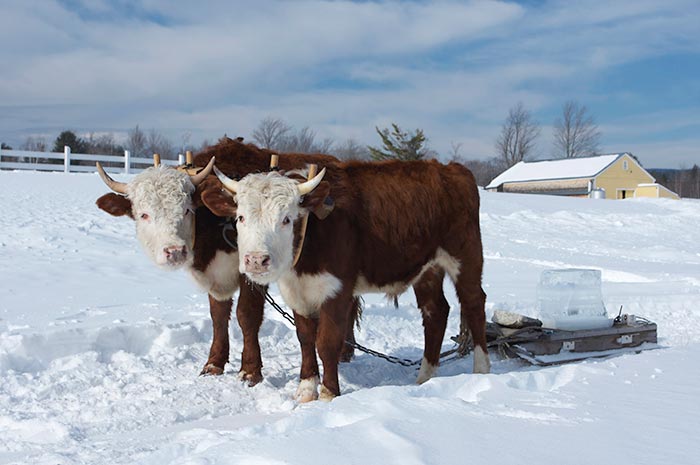 One of the ice-hauling teams of young oxen brought in by a local 4-H Group.
Photos by Debra Carr Brox

Men in overalls and plaid wool coats and kids with only their eyes exposed lined up along the edge of the small, frozen pond, each with a four-foot saw in their hands. As they pushed and pulled on the antique tools, there was laughter and occasional huffing and puffing, sending plumes of steam into the winter air. Gradually, the pond gave up its bounty, and huge blocks of ice were released then guided gently to a wooden lift, where others labored to place them on sleds. From there, a team of young oxen pulled the sleds to the ice house, filled with sawdust and ready to preserve the season’s harvest.

This scenario has played out for more than 200 years. Thanks to the Remick Museum in Tamworth, New Hampshire, it continues today for everyone to observe and experience. The museum hosts many events throughout the year, but my favorite is the Annual Ice Harvest and Winter Carnival. It’s an authentic, low-key celebration of life in New England on a beautiful farm, surrounded by the White Mountains. The property has been in the Remick family since 1779 and has been home to country doctors and a working farm since 1808. Six generations have occupied the farmhouse, which became a museum in 1993. 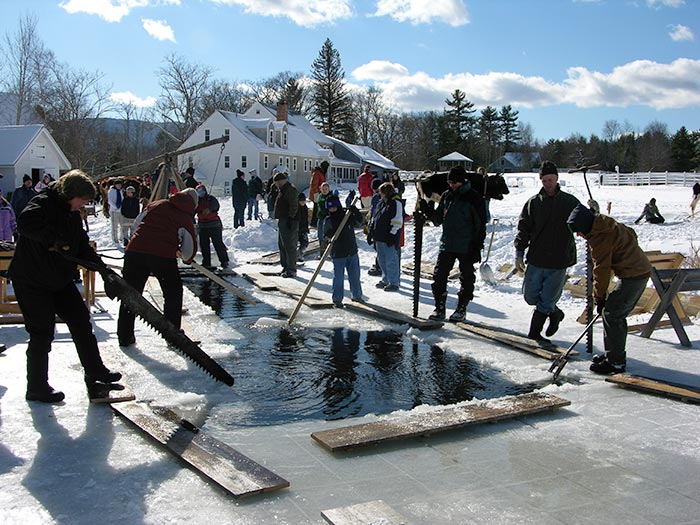 Everyone gets to try harvesting ice the old-fashioned way at the Ice Harvest and Winter Carnival at Remick Farm.

Two things really impressed me at the carnival. First, the members of the Yankee Teamsters 4-H Working Steer Club of New Hampshire, as they each confidently handled and led their team of steer or oxen transporting the ice blocks from the pond to the ice house. They were proud of the animals and were obviously having a great time. The smaller 4-Hers gleefully hopped on the wooden sleds for a free ride while the pre-teens and teenagers guided the massive steers steadily along their route.

Though I live in Maine and spend a lot of time in rural areas, I rarely see kids engaged in this sort of activity. In fact, I rarely see kids engaged at all, except when they’re on their phones. It was very cold, the kids were responsible for the welfare of the animals and completing a tedious task repeatedly, and they all had smiles on their faces. 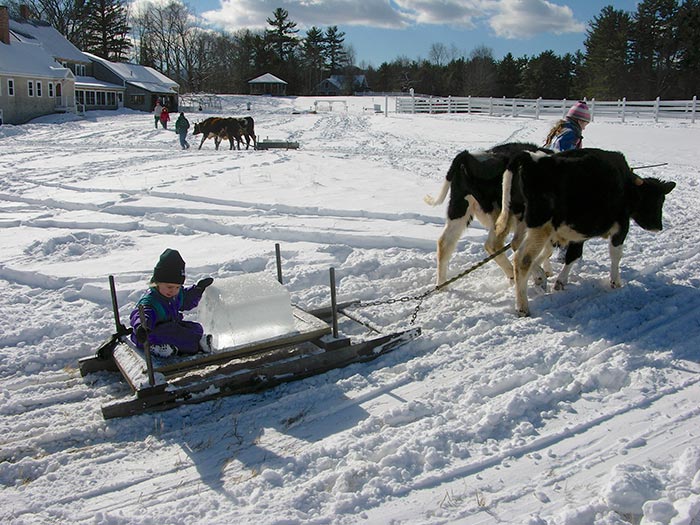 A future ice harvester gets free ride to the ice house.

Second, the easy, down-home atmosphere allowed me to imagine that I was truly experiencing life as it was for early settlers. Though it’s called a carnival, there is no loud, commercial fairway with greasy food trucks. Instead, you’re invited into the farmhouse to warm up, where food and hot drinks are available. There are no sounds of generators or motors. The only forms of locomotion are steers, horses, and dog pulling sleds and sleighs. And, of course the humans, pulling on the ice saws. Attractions include ice sculptures, trying your hand at marking, cutting, and piking ice blocks, and a “Name the Baby Bull” contest.

An afternoon at Remick Farm Ice Harvest is a true celebration of winter and just plain fun. I guarantee you’ll have an album full of great family photos. And the next time you fill your glass with ice by pushing a button on your refrigerator door, you’ll remember the country doctor’s peaceful farm in New Hampshire.