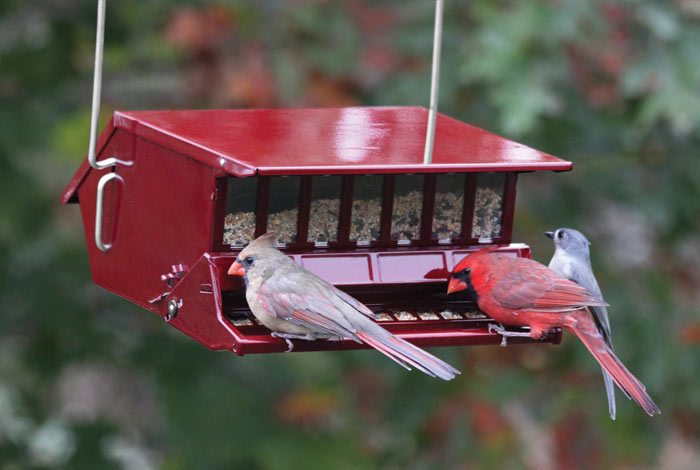 You can ensure your birds get the food you left for them with a squirrel-resistant bird feeder.
Photovia orvis.com

I love to hunt game birds in the fall, but I enjoy feeding songbirds almost as much (not quite, but almost). There are few things quite as serene as a quiet snowy morning and a bird feeder crowded with small colorful birds to give you a sense that all is right with the world. Cardinals, finches, tufted titmice (or is it titmouses?), nuthatches, chickadees, and a host of other small and delicate birds flitting from feeder to feeder. My wife, Mimi, and I spend a fair amount of time on the porch in the warmer months and in the kitchen during the winter watching their antics, and it brings a sense of peace in an otherwise hectic world.

But I’ve discovered over the years that feeding the birds is not a task for the faint of heart. In order to maintain the harmonious flitting, as it were, you need to have a quick mind and at times be a deadly shot in order to maintain the delicate balance of proper birds that you want to come to the feeder–as opposed to the sly and cunning intruders who steal millions of dollars in black oil sunflower seeds annually. (I’m making this number up, but based on what I spend, I believe it to be a reasonable statement).

First and foremost are the squirrels of both the red and gray varieties. The gray squirrel are simply big galoots with little or no sense of style and wit. Their only saving grace is they make excellent Brunswick stew. Their overt greed and frontal assaults on the feeder remind one of rednecks at a fish fry. They are loud, boisterous, and greedy, stuffing their faces with little or no concern for their surroundings, which makes them easy prey for a well-timed shot in the butt with a BB gun (the squirrels not the rednecks, though having grown up as one in the deep South, I’ve personally witnessed the latter).

I honed my BB gun skills on Grandma Moon’s porch and am still proficient some 50 years later. I have also invested in squirrel-resistant feeders that shut down as soon as the weight of a fat squirrel is applied. I take great pleasure in watching them try to figure out why they can’t get at the feed, while I harass them with biting commentary as to their intelligence level.

Red squirrels, on the other hand, are insidiously cunning, and catching one of them in the open is as challenging as any hunting I’ve ever done. They are constantly aware of their surroundings and will move toward the feeder step by step, constantly surveying their surroundings. Any sudden movement and they disappear like snowflakes on a kid’s tongue. Whatever success I’ve had at pinging one required as much preparation and skill as most of my turkey hunts. I’ve even gone to the extent of building a small blind on the porch in order to conceal myself. I grab a cup of coffee and the trusty BB gun and sit there with the gun pointed toward the feeder. I enjoy the coffee and watch the birds, and all in all, it is a pleasurable way to pass a couple of hours. If I’m lucky, eventually the wily red squirrel makes his appearance. I stealthily lean forward in the blind, and just when he is distracted by his first taste of the luscious black oil, I let him have it. For those of you out there who are outraged by this shooting of defenseless and furry little creatures: Tough. You are welcome to pay my bird seed bill, not to mention that a red squirrel in your walls or attic is poltergiestian torture.

I keep the bird seed in a metal garbage can out on the porch. I used to use a plastic garbage can, but your defenseless furry little creatures gnawed a hole in it and emptied it. I immediately went to galvanized aluminum, but the other day I heard a loud banging on the porch. I opened the door to discover the garbage can upended and two massive raccoons feasting on the bird seed. They looked at me with utter disdain until I then opened the door wider and out came by Labradors, Murphy and Pickett. In the ensuing chaos, chairs sailed across the porch, tables were upended, citronella candles went flying, and the result of two 70-pound. Labradors and two 25-pound raccoons tearing through the outdoor décor was epic. It was like a good bar fight, and I have since had no return visits from the masked bandits. Murphy and Pickett enjoyed the exercise, and ultimately a good time was had by all.

The greatest of the predators are the bears. To them, a cast iron bird feeder pole is simply something to be bent and twisted into unrecognizable scrap metal, and the bird feeders become shattered pieces of junk. The result is another expensive trip to the bird store to replace the feeders and a reevaluation of your feeder placement. A Daisy Red Ryder is not going to faze a 200-pound black bear, and I’m not sure the dogs would appreciate the mismatch.

Other intruders include blue jays, a raucous and gluttonous group that can empty a bird feeder quicker than a toilet flush. Doves are large birds and will eat a lot of feed. Unfortunately, up here in Vermont you cannot legally shoot them, whereas in the South they are considered a game bird and are quite tasty deep fried and served with biscuits and succotash. They are also the source of one of the better social traditions in southern society, the dove hunt. This is an all-day affair with all your friends and neighbors, fine guns, great dogs, too much food, good shooting, southern hospitality, and old bourbon liberally applied after the shooting is over.

My final discovery in feeding the songbirds is that, as pleasant as they are to watch, they are a picky bunch, and if you substitute the less expensive striped sunflower seeds, these little ungrateful clowns will sit around in the trees with disdain until you relent and bring back the more expensive black oil. While I am eating Lean Cuisine, these birds are feasting on the caviar of bird food, but it’s a small price to pay for a peaceful morning of bird watching; and a good excuse for me to revert to that kid on Grandma Moon’s porch, feet up on the railing, Red Ryder in hand, the defender of feeders.

2 thoughts on “In Defense of Feeders”