I ’m not a creature of habit, but I have a few rituals. One of them is to officially start my fishing season each spring with trip to Grand Lake Stream in Maine. It’s a long way from everywhere, and the town (its official name has been Grand Lake Stream Plantation since 1897) is an unpretentious haven for fly fishermen and landlocked salmon. GLS went through many changes since it was settled in the 1600’s, but about 150 years ago, progress sputtered and stopped. It’s the perfect place to maintain a tradition.

I pulled into the parking lot at Dam Pool two years ago on a wet May morning. The weather in Down East Maine is often dreary and dark, and on this day, the clouds hung sullen and low, releasing a drenching downpour. The fishermen positioned around the pool looked serious and determined. I surveyed the situation, waiting for a spot to open. I didn’t see as much as a strike in over a half hour.

The Dam Pool, wide and short, is a challenging place to fish. There is limited space on on the banks, and the ledge drops off sharply, making wading tricky. The current eddies and swirls, confounding your drift, and the water is so cold that you can stand it for only short periods of time. Fishing is prohibited within 150 feet from the dam, which further reduces access. There are just a few prime spots to stand, and they are usually taken. 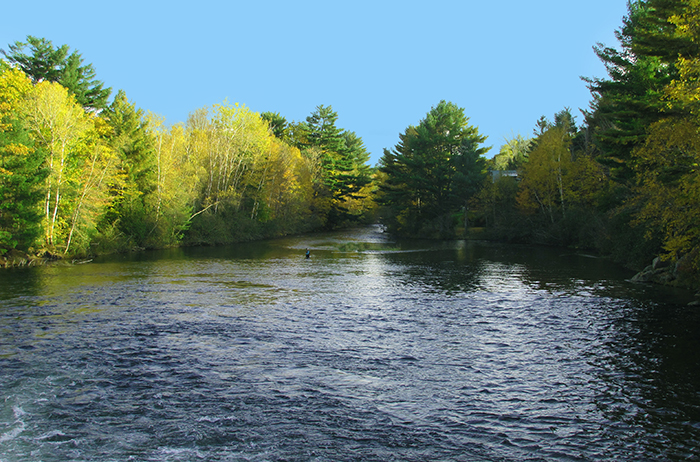 The Dam Pool is often crowded because of easy access, but there are plenty of fish to be caught.

Finally, a guy reeled in and trudged up the bank. I didn’t bother to ask him if he had any luck—he wouldn’t have left the pool after driving all the way up from Pennsylvania (I noticed his license plates) if he had had any. I took his place and tied on a Beadhead Hare’s Ear Nymph. This is a land where the streamer is king, but I thought it wouldn’t hurt to think outside the (fly) box. On my second drift, my line stopped. I had a fish on.

Big brookies hug the bank there, and since the fish stayed deep, I thought that was what I had. Then it rocketed out of the water and revealed itself to be a fine, 25-inch salmon. Some of the fishermen in the pool stopped and shook their heads, hands on hips. Others lit cigars and watched. Finally, as I tried to net it several times without success, I turned to the fisherman next to me and said, “My net is too small!” He smiled and replied, “Your fish is too big!” I realized, at that point, that I may not have the proper perspective for crafting whopper fish stories.

I worked my section of the pool for another hour—you don’t feel the cold when you’re catching—but no dice. I realized my fingers were numb, so it was time to take a break. There’s one general store that serves as the hub of the rustic village. It’s a good place to dry off. The proprietor has allotted an impractical amount of space to a large table. It’s known as The Liar’s Bench. GLS is a fishing town so, of course, it’s always occupied during the season. At The Bench, pros and wannabes alike can spin a yarn, no questions asked. There’s no shortage of tall tales and hot coffee. 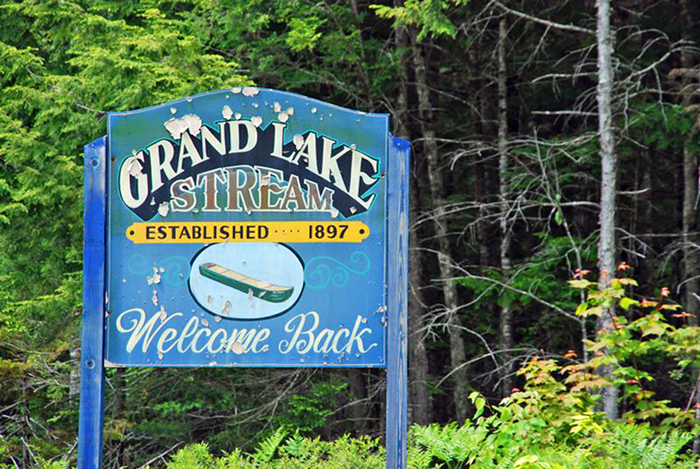 There’s a lot of sporting history in this part of Maine.

Hot coffee sounded pretty good, so I headed to the store. I knew I had to “bring something to the table,” literally. Missing the exaggeration gene, I was feeling the pressure. What to do? I’d tell my tale, and the truth would have to be good enough. I only caught one fish, so I only had one option. And I had witnesses, possibly hostile ones.

I entered the store, not meeting anyone’s eye. One of the guys at the The Bench spoke. “Nice fish you got in the Dam Pool.” He slid over to make room for me, which meant, “Tell us about it.” I did, and the truth was good enough after all.

One thought on “Spring Fishing on Grand Lake Stream”