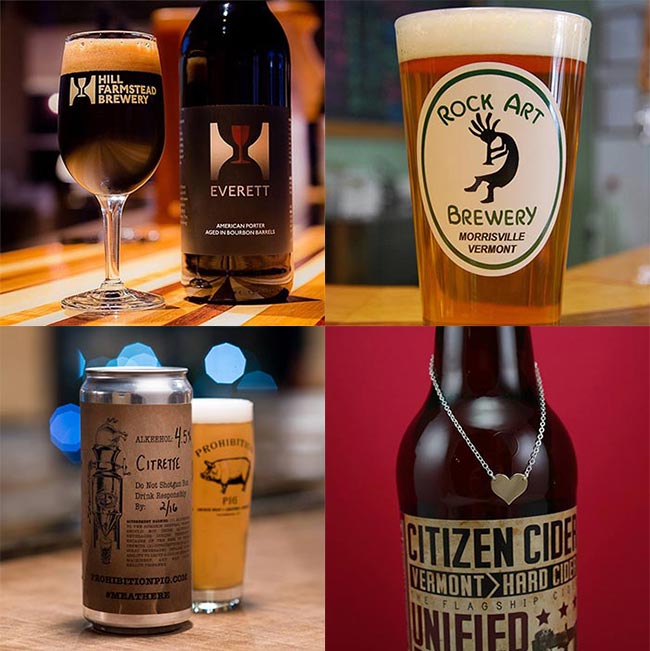 Ask any of my friends about me. One of the first things they’ll tell you is “Wayne Rock knows his beer.” Truth be told, Vermont’s liquid gold was a considerable influence on my decision to swap the Blue Ridge Mountains of Virginia for the Green Mountains of Vermont and take a job at Orvis. So naturally, the first time I had some friends from The Old Dominion State show up on my doorstep, they wanted me to give them a grand beer tour of Vermont.

At the top of their list was a brewery that had been named best brewery in the world by RateBeer for three consecutive years—Hill Farmstead. Visiting the Number One brewery in the world was followed in importance by the idea of getting their hands on the often elusive (but always delicious) Heady Topper beer. Visiting Hill Farmstead would be easy…if you consider driving three-and-a-half hours in midwinter to the point where you’re a stone’s throw away from Canada easy. More difficult was any guarantee that my friends would be able to get their hands on that silver tall-boy can of beer with the current rating of 100 on BeerAdvocate.

After some research and consultation with some individuals who should have PhDs in Vermont craft beer, I felt I could reasonably assure my friends that they were going to get their Heady Topper and get a world-class beer experience in the process. According to the advice of folks who have visited Hill Farmstead before, my friends and I knew we would need to get to Hill Farmstead before they opened to lessen the wait times. Luckily for my travel-weary compadres, the brewery doesn’t open until noon on Fridays, so they didn’t have to wake up tremendously early. 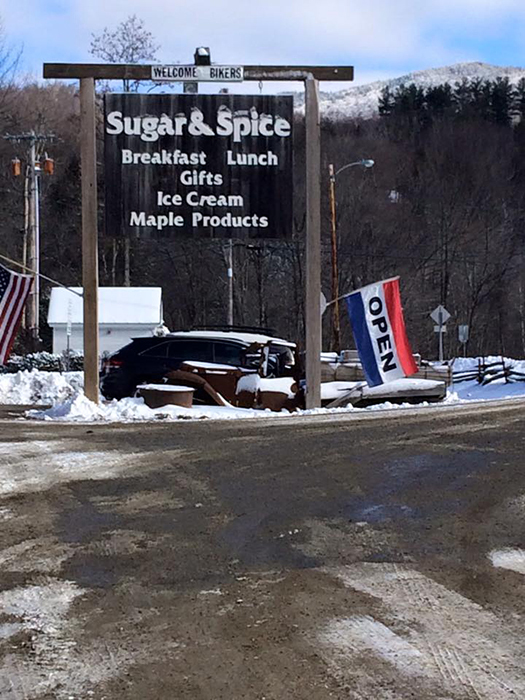 It’s important to lay down a base early in the day.
Photo by John Angove

At 7 a.m., our alarms bang, sing, and clamor. The aroma of coffee fills the cottage, and three red-eyed young men fill travel mugs with go-go juice and hop into my trusty gray pick-up truck, affectionately named “The Silver Bullet.” We munch on granola as we motor along to Hill Farmstead, but it’s not making a dent in our hunger. An hour and a half into our trek, we stop for a proper meal at Sugar and Spice in Mendon—a quintessential Vermont restaurant and working sugarhouse that produces Vermont’s other liquid gold, pure maple syrup, a treat for the uninitiated. I’m going to behave on this journey, since I’m the driver, but my friends have no such commitment, and they’re going to need some meat on their bones to get through the day I have planned for them. When our food arrives, it is followed by the prolonged silence of happy mouths stuffed with pancakes—talk about getting the day starting on the right foot!

We continue on our trek, and I call up a few beer stores to see if any of the usual suspects are expecting Heady Topper. Many disappointing phone calls later, no Heady Topper leads. To make matters worse, I stop in a convenience store to pay for gas and see a fridge with a spot reserved for Heady Topper that’s completely bare. I bolster my spirits and keep on toward Hill Farmstead. About 20 miles away from Hill Farmstead, I start counting my blessings that I decided to bring my four-wheel-drive truck. The roads are covered in snow. My buddies are getting a true Vermont experience. After much bumpy backroad travel, we’re relieved to finally get to Hill Farmstead in Greensboro. We grab our growlers, skate our way across the slick parking area, and trot into the tasting room.

On Weds., March 16, we’ll release E. Each 750ml bottle is $30 with a limit of 3 bottles per person. E. is for Edward (1917-2002), my grandfather, as well as the name of the first beer that I brewed in my brewery on March 30, 2010. E. is for Easter; brewing in Denmark revealed a European tradition of crafting Easter (Påske) beer. Finally, E is for entelechy, the continued actualization of our potential through spirited e ort and vision. Thus, in honor of E., to the past and future emprises here on Hill Road, a special fourth anniversary release: Edward fermented with yeasts of Belgian origin, aged in oak barrels, dry-hopped with Galaxy hops and bottle conditioned. We will also release a new batch of Everett, our American porter. Each 500ml bottle is $8 with a 6-bottle limit per person.

We are a bit overwhelmed when we enter the hallowed doors of what many consider a craft-beer promised land. I get my growlers filled with three different IPAs, and my buddies grab a couple of beers. I just have a few sips on some tasters. One of my friends becomes infatuated with an IPA that’s brewed with Earl Grey tea, and my other friend is gushing over an American Pale Ale called Edward. Well worth the trip.

We finish up our stop at Hill Farmstead and head for an underrated gem named Rock  Art Brewery in Morrisville. Personally, I think that their Limited Access DIPA, Maple Wheat, and Russian Imperial Stout (which has been aged in numerous barrels) are incredibly good. We walk in the door and are surprised by a raucous bachelorette party. The bachelorette party goes off to tour the brewery, and we’re finally greeted by two kindly faces from behind the bar. Both are eager to share their knowledge and insight on the different beers. All of the beverages sound amazing, and we all choose tasting flights. The best part is that they offer a four-sample (perfect for those driving) and an eight-sample flight (for those being driven). My cohorts are over the moon with the Maple Wheat and think that the Red Wine Barrel-Aged Stout is definitely a unique experience. We settle up after finishing our samples and proceed to our next stop, Prohibition Pig. 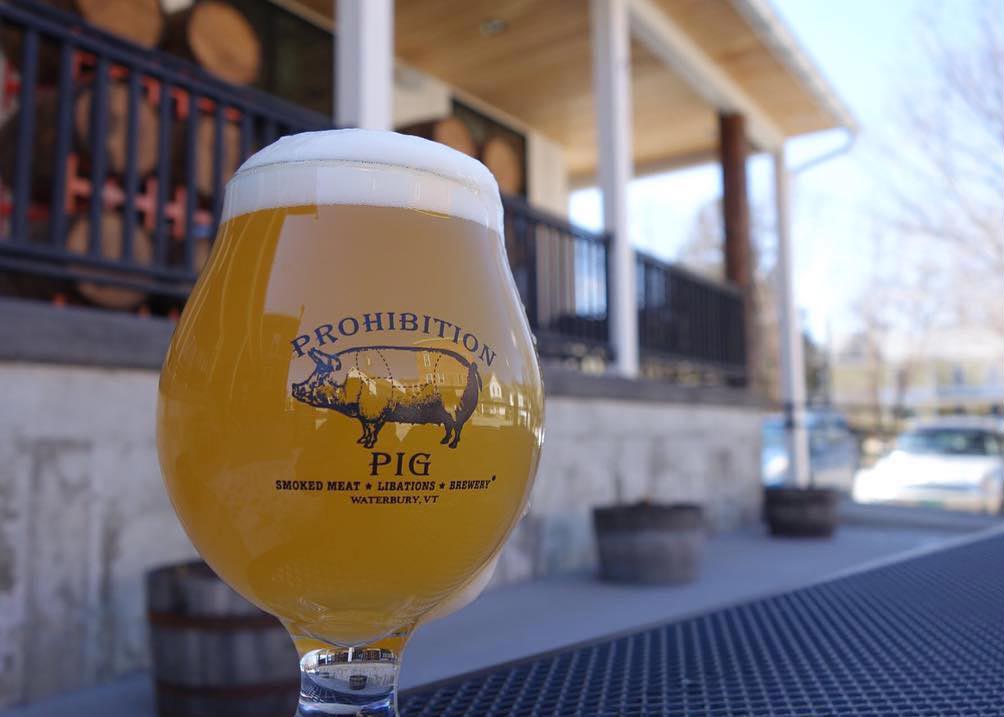 Prohibition Pig is a Waterbury landmark that draws beer aficionados from around the globe.
Photo via facebook.com/prohibitionpig/

There are three reasons we want to stop at Prohibition Pig in Waterbury—they brew great beer, they cook great BBQ, and word on the street is that Prohibition Pig has Heady Topper readily available on Fridays! We struggle to find a decent parking spot and have to walk in the road due to the icy sidewalks. As soon as we walk into the restaurant, I start scanning the room for those beloved silver-and-black cans. To our delight, there happen to be two different correctly colored cans: one is Heady Topper, the other is Focal Banger, and both are very delicious. We’re quickly shown our table and before our rear ends can hit the chair, my buddies order their Heady Toppers. The cans hit the table, the waitress opens them–hiss. . .crack–and there’s a pause before they take their first sip. Still silent, I see them look at me: to say they were grinning ear to ear would be an injustice. As they sip their Heady Toppers and remark on its excellence, I tell them that they need to try some Focal Banger (when in Rome!). Sure enough, they order some and have a hard time deciding which one they like more. We scarf down some duck-fat fries with a couple of incredible sandwiches, and I realize that we need to make some adjustments to our trip. Vermont IPAs can take their toll on you, and my friends are hitting this realization first-hand.

We hop into the Silver Bullet and head west to Burlington. As we’re approaching Burlington, I realize we’re getting to town right as the sun is setting. I quickly find a place to park, and we walk out to the lakefront of Lake Champlain. It’s really cold–15 degrees, to be exact. We brave the harsh lake wind for as long as we can, soaking in the most picturesque sunset.

The variety of cider options, each tastier than the last, is mind-boggling.
Photo via citizencider.com

We hike up the asphalt hills from the lake, and I tell my cohorts that I’m going to switch gears on them by taking them to a place that makes ciders. We walk another quarter mile in the frigid cold to Citizen Cider. The place is packed, but we still decide to stick around. To our surprise, we find that the ciders are treated very much like beers at this establishment. There is one aged in bourbon barrels, one that is dry-hopped, one that is treated like an Eisbock, and there is even a cocktail menu with elaborate cider-and-spirit combinations. Although we traditionally don’t care much for ciders, we find that the ciders produced by Citizen Cider are far from run-of-the-mill and prove to be as exceptional as they are intriguing.

We snag some pizza before hitting the road on our long, two-and-a-half hour journey home. Filled with enthusiasm from the day’s events and drinks, my friends keep me engaged with lively discussions ranging from politics, our favorite sports teams, and some “would you rather” discussions that will never see the light of day. When the conversations aren’t enough, I am thinking about my growlers of Hill Farmstead chilling in my cooler. Having to be responsible throughout the day has been tough in the company of such good friends, and I plan on the growlers as my reward for good behavior. We finally reach home at 11:30 p.m. My girlfriend is glad that we made it back in one piece and very grateful that I had behaved myself. Exhausted from the day’s activities, we go to bed and I allow the growlers of Hill Farmstead to live for another day.

Wayne Rock is a Retail Allocation Analyst at Orvis.