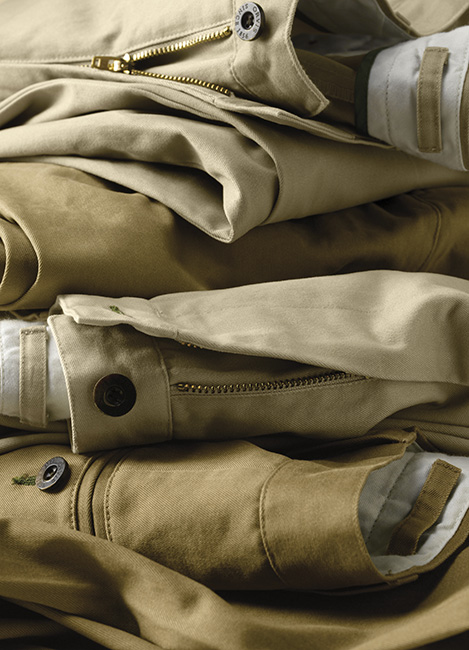 A few weeks ago, I dove into the history of chinos and how they differ from khaki pants. While chinos have an interesting history, khaki pants date back even further and have a history all their own. As I discussed in the chino post, there are a few ways to easily spot the difference between khaki pants and chinos, and I’ll get to those later, but let’s first get started with the history of khaki pants. . .which is more than just pants!

The word khaki itself is a loanword from Hindustani and Urdu (both spoken in northern India) meaning “soil colored.” That translation certainly supports my opinion that khaki pants are the ultimate neutral/natural for any man’s wardrobe.

For a long time the British army had been wearing their famous red-and-white uniforms, which earned the soldiers the name “red coats” – often used as a pejorative here in the States, leading up to and following the Revolutionary War.

Decades later, in the mid 1800s, the Corps of Guides was formed by Sir Henry Lawrence in British-held India for service on the Indian frontier. In the first year of existence, the Corps of Guides wore their traditional garb, but in their second year, uniforms were introduced that included khaki pants and shirts/jackets. Khaki is believed to have been the traditional camouflage of nearby Afghani troops, and it was thought to be an excellent choice for the new Corps of Guides who were operating on dry, brown terrain. When their supplier in England ran out of the fabric, locals began dying their garments for uniforms (both Indian and British) and civilian wear, and khaki pants began to catch on. The original fabric was geared more towards summer wear in the steamy heat of India, so it was a much lighter linen or cotton twilled cloth than today’s khakis.

Khaki uniforms became a standard in both British uniforms and Indian military and police uniforms in the latter half of the 19th century. The US Navy then adopted khaki during the Spanish American War (as I mentioned in the chino article) at the turn of the century, beginning in 1898. In the First and Second World Wars, American military uniforms shifted to an olive-green tone, with a sturdier, heavier cotton fabric, but was still referred to as “khaki.”

Soldiers returning to the States brought the versatility of khaki pants with them, and between the media exposure of national heroes wearing these handsome new utilitarian pants and their comfort, a new civilian style was born. Today you’ll struggle to find a man’s closet that doesn’t have at least one pair of khaki pants.

It’s the heavier fabric of khakis that appeared in World War II uniforms that has defined modern khaki pants for men. Whereas chinos are lighter and more formal, the versatile function of classic khakis gave them a more casual look and purpose. With manufacturers designing all-purpose khaki pants, which I’ll wear chopping wood in the yard or grabbing dinner with friends, khakis have entered a whole new realm of function in a man’s wardrobe.

Most guys like easy decisions. And there’s certainly no fuss to be had with khaki pants. Find a pair you like and wear them anywhere.