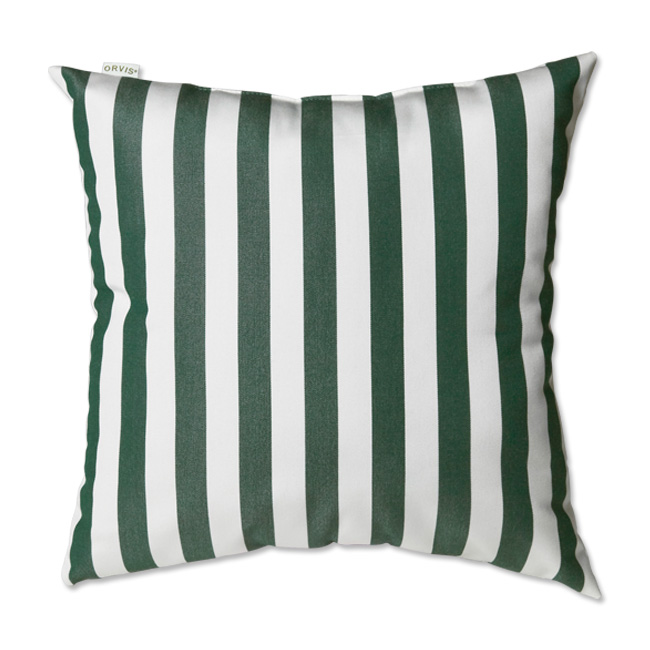 “Bought the rocker pillow and throw pillow both in green/white Sunbrella for my sailboat’s saloon. The quality blew me away.”—ronbo from New York

Remember the look of historic storefront awnings? Scores of them dotted the urban landscape in sepia-toned photos of the past. Main Street’s buildings were festooned with them, sheltering aproned proprietors pausing for a photo op next to their produce stands. The awnings were made of cotton canvas—it was the most durable material available for heavy applications, the industrial textile of choice. To be fair, cotton is indeed resilient. But repeated exposure to direct sunlight, rain, and freeze-thaw cycles eventually breaks it down into its elemental self—the ashes-to-ashes law of the organic universe in action.

Just after the middle of the twentieth century, a North Carolina textile company began weaving with a miracle fiber that did not seem to fade or break down. Until that moment, nobody in the industry could make the claim that their awning fabric would stand up to the elements, least of all guarantee it. The company was Glen Raven, and they called their new fabric Sunbrella.

In its earliest guise, Sunbrella emerged as the preferred choice for awnings, but soon insinuated itself in the boating industry’s marine textiles, too. After all, if it could stand up to the relentless elements on Main Street, it should be able to handle them dockside. And it was only a matter of time before Glen Raven pressed it into service right in our own backyards. Until the early 1980s, vinyl was the material of choice for resilient outdoor seat cushions. Sunbrella brought with it the promise of durable fabrics with visual and tactile appeal. A weather-stable outdoor cushion that would not stick to your bum on a hot summer day—and it was pretty? Miraculous indeed.

There’s no stopping it now. Sunbrella has come inside, too, into our family and dining rooms, and even in the kitchen and bath. We love it for its versatility, for its impressive array of colors and patterns, not least of all for its legendary durability.

Inexorable Sunbrella. Call it the evolution of the species. And to think it all began with a plucky little fiber called acrylic.