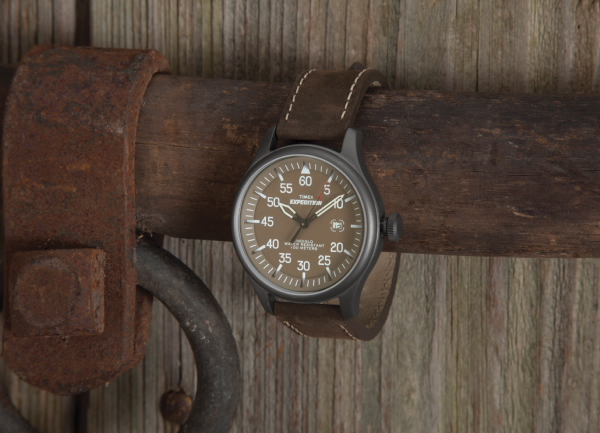 Over years of technological innovation, men’s wristwatches have retained an appeal that is, well… timeless. They sit right in a sweet spot of utility and fashion, where modern and vintage overlap. And within that space, a wristwatch is versatile: It completes an outfit with a look that can lean classic or distinctive, rugged or refined.

In the end, though, there are no two ways about it. The right watch on a man is a thing of beauty.

To learn answers to the most common questions about wearing these handsome accessories, about how in the world to use a chronograph, and about the history and future of wristwatches, read on:

How to Measure a Wristwatch

The size of a watch case should be well proportioned to the wearer’s wrist so that the fit is stylish and comfortable. The diameter of a watch case is measured from one edge of it to the other and does not include the crown or any pushers. Today, the standard sizes for a man’s wristwatch are usually 38 mm to 42 mm.

To ensure the proper size watch for your wrist, measure around the wrist with a cloth tape measure, or use a piece of string and a ruler. A 6” wrist is well suited to an approximately 38 mm case; a 6.5” wrist to about 40 mm, and a 7” wrist to about 42 mm. Choose a case approximately 44 to 46 mm for a 7.5” to 8” wrist. These are general guidelines; the main idea is that for the cleanest styling, a wrist at the very top end of the range won’t wear a watch at the very bottom end, or vice versa.

As a rule, the bigger a watch face, the thicker its case. A 38 mm watch face is generally about 6 mm thick, while watch faces up to 42 mm are 7 to 8 mm thick. Keep in mind that bigger and thicker watches require a bit more room to button under a shirt cuff. So a thick watch on a slim wrist may cause frustration with otherwise well-fitting cuffs.

Where to Wear a Wristwatch

When you’re wearing a long-sleeved shirt, its cuff should hide the watch when your arm is straight, and reveal it when your arm is bent. This puts the watch just above the end of the long bones of the arm. A watch allowed to slide further down toward the hand is out of place and will restrict movement at the wrist joint.

The band should fit snug enough that the watch does not twist around the wrist or fall toward the hand when the arm hangs down. Metal bands may need to be sized professionally; leather or woven bands do not need professional sizing.

What Wrist Does Your Watch Go On?

Traditionally a watch is worn on the non-dominant wrist: on the left wrist for righties, and on the right wrist for lefties.

In practice, it’s completely up to you.

How to Set a Wristwatch

Analog wristwatches aren’t just classic and classy accessories. They also need to keep and display perfect time. Set the time on a wristwatch using the knob on its side, called the crown.

If your watch has a screw-down crown, unscrew it until it is loose.

What Does Chronograph Mean?

Does a Chronograph Watch Need a Battery?

Some do, and some don’t. Watches described as having a “quartz movement” need a battery. Watches with a “mechanical movement” must be wound—no batteries required.

Some chronographs are quartz, and some are mechanical.

Is a Chronograph Watch Dressy?

Chronographs come in many styles. In general, they retain some of the daring, capable, no-nonsense appeal of the test pilots and astronauts who popularized them. This watch feature has even saved some high-profile lives. Literally—very high. When an oxygen tank aboard Apollo 13 exploded, the new mission goal became returning all astronauts safely to Earth. The astronauts packed into the Lunar Module, where all the power had been shut down—including the clock. Command module pilot John L. “Jack” Swigert used his chronograph to time a 14-second fuel burn that corrected the spacecraft’s course.

(Watches went with plenty of astronauts. A self-described “watch guy,” astronaut Buzz Aldrin wore his chronograph on the moon. Looking back later, he wrote “…few things are less necessary when walking around on the Moon than knowing what time it is in Houston, Texas. Nonetheless … I decided to strap the Speedmaster onto my right wrist around the outside of my bulky spacesuit.” In space, no one tells you where to wear your watch.)

Usually, the stopwatch on a chronograph is a smaller circle on the watch display with its own small hand. Some chronographs have circular displays to measure hours, minutes, seconds, or even tenths of seconds. Each measurement is displayed in its own circular eye.

Some watches feature a chronograph-style face with other circular complications (see “broader definition” above). 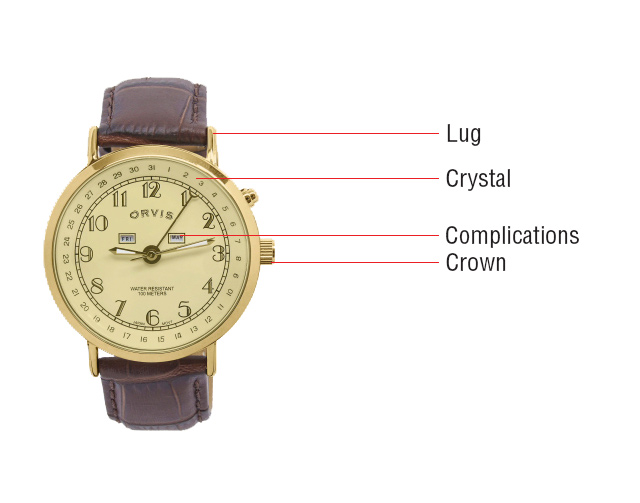 Diagram of the Grafton Street Watch
Photo via orvis.com

And What Are Complications on a Watch?

A complication is any additional feature on a wristwatch besides the traditional time-keeping hands. Today we might name them “functions” or “applications,” but it seems clear that the watchmakers building these intricate complications were the ones who named them.

Some common and useful complications include dials for 24-hour time, day of the week, day of the month, and the time in a second time zone.

When Was the Wristwatch Invented?

The first known watch for personal use was created in 1574. It was described as an “arm watch” and it displayed only the hour. In the following decades, watches were carried on the arm or (more commonly) around the neck or in a bag. They were heavy and large, their faces covered by hinged metal grilles. They were novelties and marvels of technological innovation, but they were not known for keeping especially accurate time.

In 1610, watch faces were first covered with glass to better protect the hands and the mechanisms. In 1680, the first minute hand was added, and a scant 10 years later, the first second hand was added—but it was not a common feature.

The first item to be called a “wristwatch” was produced by watchmaker Abraham-Louis Breguet for Caroline Murat, the Queen of Naples, in 1810. By the mid-1800s, watchmakers were producing a range of wristwatches, mostly for wealthy women. (Wealthy men used pocket watches.) 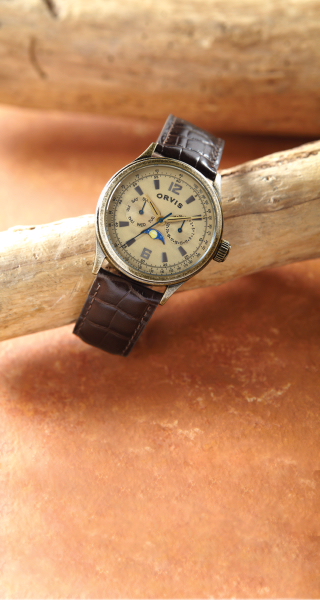 When Did Wristwatches Become Popular?

By WWI, watches were so precise they could be used to coordinate troop movements. Until that time, wristwatches were seen mostly as a women’s accessory, while men used pocket watches. But military men found that setting down other equipment in order to dig for a pocket watch in the chaos of the battlefield was, shall we say, suboptimal. Officers began wearing wristwatches, and other soldiers and civilians followed.

In the 1960s, something changed. For their entire history, wristwatches had operated mechanically: A watch’s mainspring transmitted energy through a series of springs, gears and other components to keep time. But in 1969, quartz watches were developed. These watches are powered by a battery and they use the vibration of electricity through a quartz crystal to keep time. By the 1980s, the vast majority of watches were quartz, and they remain so today. Wearers enjoy quartz watches’ rugged sturdiness, their incredible precision, and their affordability. Mechanical watches are still around as well. They are more expensive and less accurate, but they are popular with luxury watch enthusiasts.

When men are no longer interested in accessories that are rugged, versatile, and easy on the eyes… When nobody seeks a classic, stylish gift for their husband, son, boyfriend or dad… When precision, elegance, and function fall disregarded by the wayside… Perhaps then, men’s wristwatches will become obsolete.

Until that time? We say: Wristwatches are most certainly not obsolete.

4 thoughts on “All About Men’s Wristwatches”