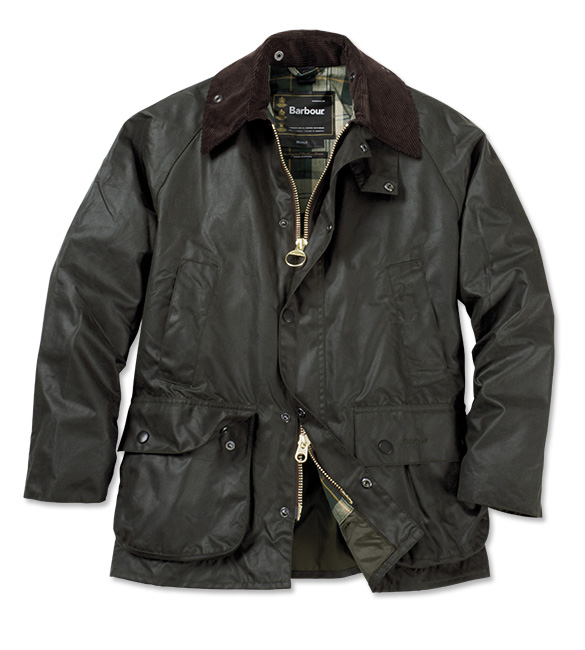 “This Bedale is my first Barbour and I’m positively delighted at the quality and fit. I find it to be perfect to wear with a pair of well broken in jeans and sweater or with dress shirt and noose, err – tie. The style is one that never goes out of fashion.” – imodvek from Chicago

At Orvis, we’re familiar with the thought that some of the best clothing designs come out of sporting traditions. The Barbour Bedale jacket is no different. For over thirty years, this simple jacket has delivered a combination of simple style that Britons, Americans, and the whole world have come to love, and has inspired spin-off designs within the Barbour catalog and knockoffs the world-over. But what makes the Bedale jacket such a sought-after piece of outerwear? It starts in the field. And that’s where we’d always prefer to be!

The Barbour Bedale jacket was originally designed by Dame Margaret Barbour with a focus on equestrian uses. It’s a shorter jacket in length and is tailored to allow ease of movement, whether on horseback or ducking through the brush on foot. Its classic styling has allowed the Bedale to go almost unchanged in its thirty years, while becoming possibly the best known of all Barbour products.

Where its style has held up to discerning shoppers, the Bedale’s waxed-cotton construction has held up to the elements. Waxed-cotton is known for its ability to shed rain and fight off thorny thickets without tearing or even pulling. And it’s waxed-cotton that Barbour has really built its name on in more recent decades.

In fact, Dame Margaret Barbour has been credited with reinventing the waxed-cotton clothing that, along with the popularity of the Bedale, has lead all waxed-cotton jackets in the UK to often be colloquially referred to as “Barbour jackets” despite their brand of origin. Much like Kleenex is often used to refer to tissues in the US despite the brand.

So it would make sense that Dame Margaret Barbour chose to make her simple, functional and handsome Bedale jacket design from such a versatile fabric.

Do you own a Barbour Bedale jacket? Is it one of the originals from 1981? Or are you thinking about adding one to your wardrobe? Let us know in the comments.

One thought on “Bedale Jacket: The gold standard of Barbour coats”