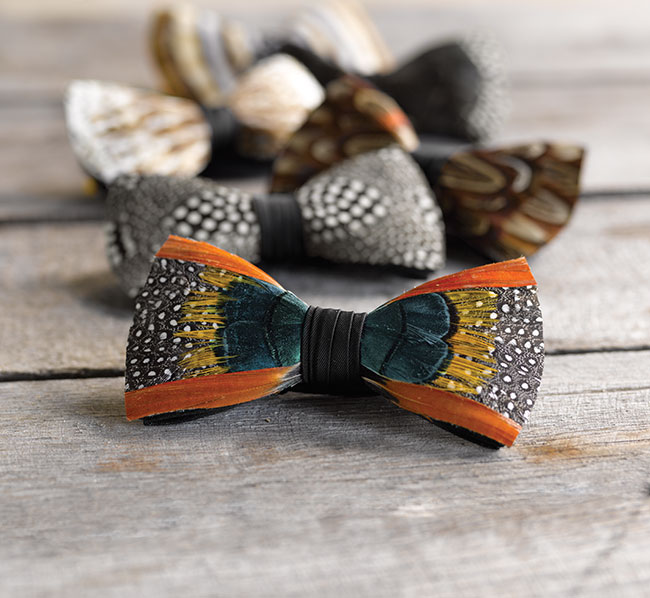 Wear colorful feathers under your chin, and people will talk. Gossip can be a good thing. It’s what put Brackish Original Feather Bow Ties on the men’s couture map and helped nurture along the company from its quiet beginnings to a full-blown, full-time operation for founding partners Ben Ross and Jeff Plotner.

Are we ever smitten with these unique feather bow ties, their iridescent colors and eye-catching patterns unlike any others we’ve seen. We’ll bet you are, too. 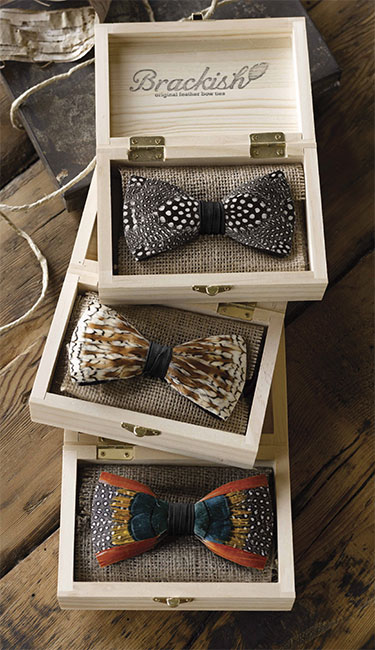 Wait—bow ties handcrafted from colorful bird plumage? Well, yes. Seems it’s what you wear when you’re a presenter at the Oscars, or attend your own movie premieres. Or when George Clooney invites you to his wedding; at least, Bill Murray did, on all those occasions. These unique feather bow ties have been noticed ‘round the necks of high-profile folk: Andy Samberg, Don Cheadle, Jack Nicholson, and Ringo Starr have all worn them. (You know you’re onto something big when a Beatle wears your swag.)

But they’re also popping up at weddings far and wide, making exceptional groomsmen’s gifts—it’s precisely how the Brackish Feather Bow Tie came to be in the first place. Keen to present something extraordinary to his own groomsmen, South Carolina native Ben Ross fashioned for each of them a feathered tie from castoff farm-raised turkey plumage (his original design ultimately came to be known as the Jive Turkey). Each fella in his wedding wore one, and soon a buzz emerged around them. More and more people asked for their own; it did not take long for Ross to realize his invention held value. That was in 2007.

After allowing this notion to simmer a few years while continuing to turn out the beautiful bespoke ties, college chums Ross and Plotner officially partnered up in 2012 and rolled out Brackish Original Feather Bow Ties in Charleston, SC. These two creatives put their noggins together to devise a straightforward but serendipitous business strategy: take a revered piece of men’s wardrobe—the bowtie—and elevate it to something remarkable. Brackish, the self-proclaimed “purveyor of conversations,” now produces exquisite feather bowties in droves, handcrafted by a team of 50 artisans and production assistants. 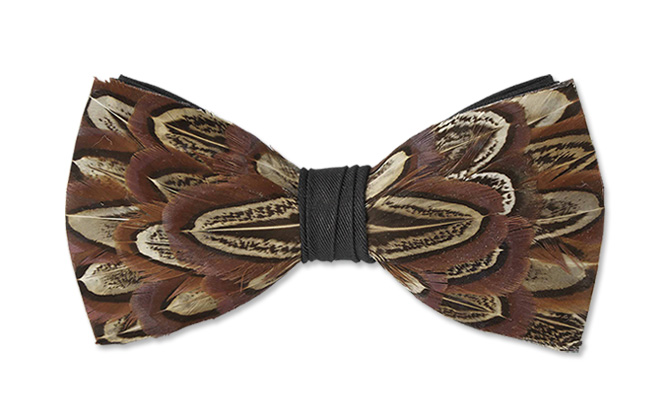 Shake Your Tail Feathers: How a Brackish Bow Tie is Made

Showcasing the beauty of nature: that is the aim of the Brackish Original Feather Bow Tie company. Founder Ben Ross grew up a passionate outdoorsman in South Carolina (co-founder Jeff Plotner hails from neighboring St. Simons Island, Georgia), an upbringing which fostered in him an appreciation for the natural beauty and wildlife there. The bow ties reflect his penchant for creative handicraft along with a keen desire to bring nature into everyday life situations.

Every feather in a Brackish bow tie is hand selected; in the company’s early days only turkey and pheasant feathers were used to create the ties, but now handpicked rooster, guinea fowl, peacock, and other feathers are included in the product line, all of them natural, none dyed. In a process that takes four to five hours, a Brackish bow tie is made by hand a feather at a time, each chosen for its unique pattern; the end result is a work of art in its own right, with no two ties alike. And because of their delicate nature Brackish bow ties are not self-tie—a welcome feature for many wearers.

The creativity does not stop with the bow tie itself: each one is wrapped in burlap and placed in a handsome wood box branded with the company’s hallmark scrolled letter B, making for a lovely presentation and storage vessel.

There is no blueprint for this business, says Brackish co-founder Plotner. The challenge is keeping the feathers as sustainable and local as possible. They’re sourced all over the country to meet consumer demand, but many come from Charleston itself. Meticulous effort and intricate detail exemplify the Brackish Bow Tie, the end result of a manufacturing process no mass production line can ever hope to re-create. The key remains the exceptional hand-craftsmanship of the company’s gifted artisans.

We think the Brackish philosophy dovetails beautifully with our own, to borrow a feathery metaphor. The Brackish Feather Bow Tie is a conservation-minded product in step with the Orvis philosophy of espousing sustainable practices and the responsible use of natural resources. You can tie this one on and feel good about it.

2 thoughts on “Bow Ties with Feathered Flair: the Brackish Story”