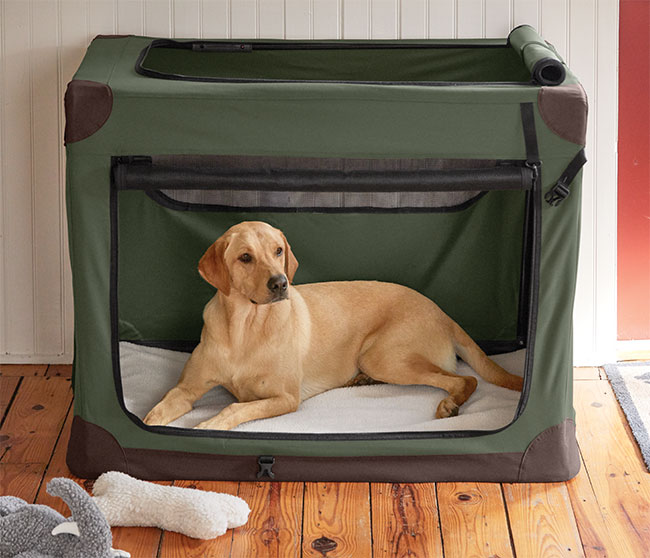 “One happy puppy is sleeping soundly at night in this comfy crate. Doubles up as a play pen during the day as the top opens for eye contact.” – Orvis customer Tefty39

When my older son was about three years old he wore an adorable pair of pajamas with wide midnight blue and white stripes from torso to toes. We put him in them as often as we could. He looked extra cute to us – if that was possible – in those jammies.

If they’d been black and white, I think their similarity to old-timey prison garb might have immediately jumped to mind. But our favorite pj’s resemblance to jailhouse uniforms of yesteryear didn’t become strikingly clear to us until a weekend visit to my brother’s family and their two dogs, when my son crawled into one of their dog crates while wearing them and closed the door behind him.

Sitting there smiling at us with his hands on the bars, somebody joked that he was imposing hard time on himself for a toddler misdemeanor perpetrated earlier. My husband and I found it amusing, but also disconcerting. We hurried him out of there. Soon after, plaid footies with an endearing button-eyed moose became our new favorite pajamas on him.

Our son was simply doing what three-year-olds instinctively do – explore their world with boundless curiosity. But having someone we love separated by bars stirred up negative connotations in my husband and I that were surprisingly powerful, despite the innocent events leading to his momentary lockup.

Turns out, dog owners can find the thought of placing their adored pooch inside a dog crate similarly off-putting. Those puppy-dog eyes staring out from behind the metal, plastic or mesh walls of a dog crate can make them feel like harsh wardens to their jailed best friend.

But rest assured your pet isn’t singing the doghouse blues. Most likely, your hound finds relaxing in his dog crate the next best thing to playing fetch or taking a long walk with you. Veterinarians and dog experts say modern canines inherited a denning instinct from their wolf ancestors, who would dig a small den in the earth or find a small cave where they would sleep, eat and raise their pups. Your best pal wants a room of his own. For Fido, it is not solitary confinement but a cozy nest where he can safely rest, cuddle with his favorite fluffy toy, or lazily watch the goings on of his beloved humans.

Slow and steady crate training will ensure that your dog’s crate becomes a safe, inviting haven. A soft blanket on the crate’s floor and a chew toy inside will keep him comfortable and happily occupied. With travel dog crates you can easily provide a comforting sense of home for your pooch while driving in the car or visiting an unfamiliar vacation locale.

Dog crates are helpful tools for house training a puppy, but no dog is meant to be crated for hours and hours, especially alone. Dog crates should also never be used as a punishment, as that will quickly undo your dog’s sense of well being within the crate. Finally, once your dog is fully trained, spending time on the inside should be left completely up to him.

If you still feel unpleasantly like your pet’s prison guard, go for the fabric and mesh options that look more like a child’s playpen. If our son had crawled into one of those years ago, we would probably have let him hang out as long as he liked or until LuLu and Bon Bon were ready to come in from the backyard, rather than busting him out so hastily.