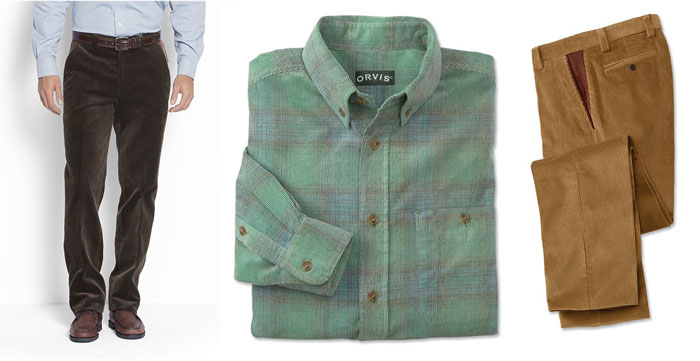 As the weather becomes increasingly chilly, prompting you to take stock of your winter wardrobe, you may wonder: are corduroy pants in style for 2018? The answer—judging from fall 2017 fashion shows—is an emphatic yes. Attractive, comfortable, and warm, classic corduroy pants and jackets are always in style in spite of having been around forever. Their enduring appeal is undoubtedly also related to their practicality. Not only is corduroy clothing low maintenance and long-wearing, it can be dressed up or down, which makes it appropriate for work and a wide variety of other occasions. And, thanks to its unique construction and texture, corduroy just gets softer and more comfortable with wear.

History of Corduroy and How It’s Made

What is corduroy made of?

Corduroy is constructed from cotton or a cotton-blend fabric made from twisted, tufted fibers arranged in parallel rows (‘cords’ or ‘wales’) and woven together with channels in between, giving it its special ridged texture. Corduroy evolved from an ancient, heavy cotton weave called ‘fustian,’ popular during the European Middle Ages. Like so many enduring textiles, ‘modern’ corduroy emerged in England during the Industrial Revolution. It was used principally to clothe factory and other blue collar workers, until it was discovered by college students and hippies in the 1960s. It entered the fashion mainstream in the 1970s in the form of men’s leisure suits, and the rest, as they say, is history.

Corduroy is generally described in terms of its ridges, or wales, from fine or pinwale corduroy fabric with 16 ridges per inch, to wide wale corduroy with 8 ridges per inch. The density of corduroy’s wales affects the weight, heft, and softness of the fabric; a higher number of wales indicates corduroy with a finer and softer texture. Very fine corduroy can feel almost like velvet or moleskin, which are related fabrics. Because of its interesting texture, corduroy often makes an appearance as trim or other accent on various apparel and other products.

Another reason for corduroy’s enduring ubiquity may be its pop culture heritage. Corduroy jackets, for example, were notably worn by starring characters in beloved movie classics including Animal House and The Graduate. The fabric even has its own ‘Appreciation Day’ on 11/11 (get it?), coinciding with Veteran’s Day.

At the end of the day, does it really matter whether corduroy is in style? It’s comfortable, warm, and easy. Maybe you won’t want to wear it to go dancing at a nightclub or to a formal venue, but you can wear corduroy pants or a blazer to do just about anything else during cool weather months. What’s not to love about that?