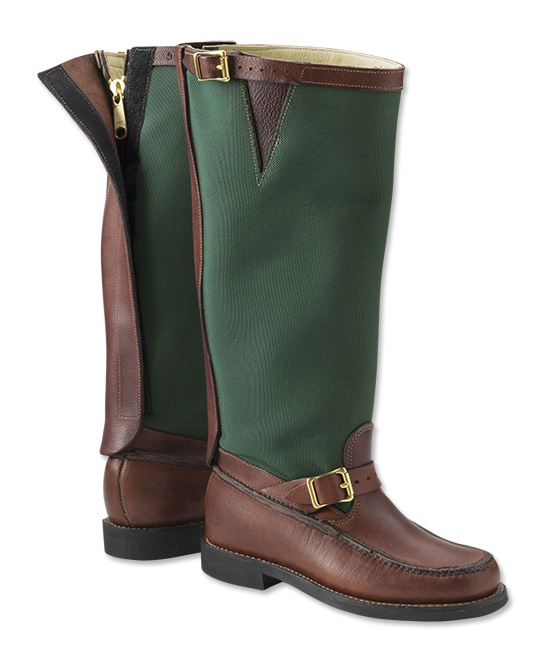 Gokey® Snakeproof Boots, made in the USA

Best Brush Boots Made! These were perfect out of the box. They literally required almost no break in. I hunt in west Texas where it seems like every plant and bush is poking at you with a three inch thorn, and the threat of a snake bite is a very real one. These boots take all that away. I have literally walked through patches of cactus and mesquite without so much as a scratch. They breathe incredibly well, and if you enjoy being complimented on your choice of foot wear during a hunt, these are for you as well.”
Orvis Customer, “Cutter”

A snakebite is definitely one of the very worst ways to conclude a day in the field. If you hunt in the contiguous United States, there’s at least half a chance you’ll run into a venomous snake while you’re in the field—and, particularly if you live in the South, it’s a chance worth planning for. Although every state but Alaska has some variety of venomous snake, Southerners don’t need telling that there’s a much greater concentration of potentially deadly snakes below the Mason-Dixon line. If you do stumble upon a snake, a good pair of snake-proof boots will protect the most vulnerable areas, but even a deflected bite can leave a person rattled, if you’ll pardon the expression. So here are a few precautions you can take to stop the situation from getting that serious in the first place.

Keep out of the tall grass. Lots of snakes hide out in low-lying vegetation, so anytime you step off the trail, you run the risk that you won’t see one until it’s too late. If you can stick to the trails, you’ll know what you’re getting yourself into, and can avoid any snakes that might cross your path. If you have to blaze your own way, consider using a walking stick to test the ground in front of you as you go along.

Keep your eyes peeled. Snakes have a way of showing up everywhere. They can climb, so check tree trunks and branches before you get too close. They also love to curl up between rocks and in small crevices, so watch your hands as you look for a good hold while crossing rocky terrain, and get a clear look at the spaces between stones before you step into them. If you do come across a snake, give it plenty of space. Most won’t attack unless they feel threatened, but if they do, a striking snake moves faster than the human eye can track, and can reach across the span of up to half the snake’s total length. If you’re wondering if you’re too close, play it safe and assume you are.

Of course, there are best practices, and there’s reality. If you spend a day hunting, you’ll probably tromp through tall grass, scramble over rocks, and run through branches, all before lunchtime. Unless a person decides to risk a bite on the hands by playing with snakes, feet and ankles are the spots that get struck most often, which means a pair of snake-proof boots will spare any good sportsman from the vast majority of bites. Of course, if a person doesn’t know better than to play with wild venomous snakes, I’m afraid there’s no pair of boots that comes with common sense.

One thought on “Gokey® Snakeproof Boots: “Perfect Out of the Box””