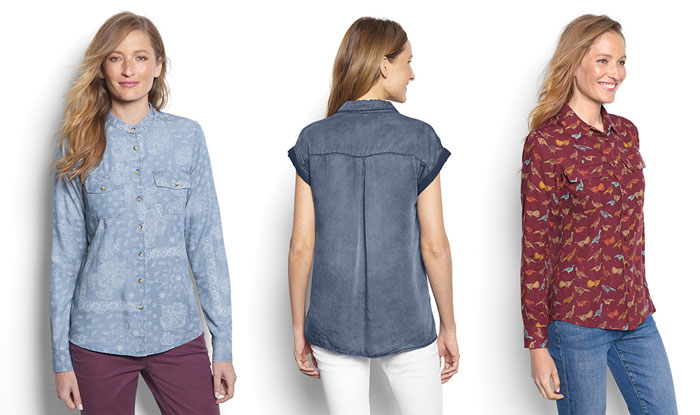 You’ve probably seen Tencel® masquerading here as your favorite cotton shirt, or there as the silk blouse you might pair with your pencil skirt for the office. Cotton you already know and love, and have from the get-go. But Tencel, a thoroughly modern, “regenerated”—not synthetic—fiber made from the cellulose in eucalyptus wood pulp, has elbowed its way into the garment fray, gaining popularity and establishing itself as a niche luxury. For all its glossy, engineered grandeur, Tencel possesses a figure-flattering and sometimes billowy drape that has earned it accolades in recent years. And what does Tencel feel like after all that manipulating? In a word, soft: its smooth hand and other amiable qualities have helped put Tencel on the textile map.

The competition is tough, but not so stiff: natural, renewable cotton is always a top choice during hot summer months because it is cool and breathable, but still insulates admirably against winter’s worst. And it’s also soft, by nature. Tencel versus cotton: read on to see how this formidable twosome stacks up in your everyday wardrobe.

Cotton Is a Household Word, but What on Earth Is Tencel?

Unlike its ancient cottony cousin, Tencel is something akin to a ‘Frankenstein’ fabric, a laboratory marvel that begins with naturally harvested parts. And however stridently Tencel occasionally tries to shake off the moniker, some still insist on naming it a synthetic because the process by which it’s converted from tree to textile requires an elaborate manufacturing technology. Turns out this industrial property is a positive, imparting an enviable versatility to Tencel. Its fibers can be made to varying thicknesses depending on the spinneret from which it is extruded, resulting in discrete materials, each with a distinctive hand—short staple length fibers make Tencel look and feel cottony, for example, and longer fibers produce a material more like silk.

By contrast, ubiquitous cotton has been around the block a few times: people have made clothing with this renewable, natural cellulose fiber since 5000 BC, and it remains the most widely used natural fiber in the world. For the most part, when you buy cotton clothing, you know more or less what you’re getting. Let’s compare the two.

Does Tencel Shrink or Wrinkle Like Cotton? Answers Herein:

Caring for Tencel and Cotton: Take off Your Kid Gloves

Most versions of Tencel can be hand or machine washed and tumbled dry without incident. And while Tencel is susceptible to mildew, it’s easier to remove stains from it than from cotton. But some Tencel fabrics do better with dry cleaning, depending on how the material was processed during manufacturing: consult your garment’s label and follow the instructions.

Cotton generally requires no special handling—it launders well, resists static cling, and maintains its shape when it contains less than 5% of spandex. It is machine washable and dryable, and can be ironed as needed, but line drying your cotton will prolong its life. Cotton repels foul odors well in the wash, and in spite of scoring slightly lower marks than Tencel for stain resistance, still repels stains well. Fabric softener encourages stains to set, so use it sparingly on your cottons. 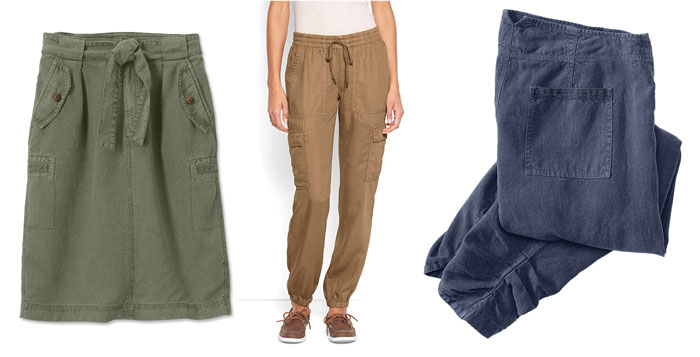 The Environmental Impacts of Tencel and Cotton

Part of Tencel’s appeal lies in its relatively shallow environmental footprint. The manufacturing of the fabric occurs in a ‘closed loop’ system with low emissions and minimal waste, where nearly all the chemicals and solvents used to process Tencel from wood pulp to finished product are reclaimed. Tencel production requires less water than cotton production—industrially farmed cotton can use up to 20 times more water. Tencel also requires less land; a half acre of forestland otherwise unsuitable for farming can produce enough eucalyptus trees without the need for pesticide or irrigation, to produce a ton of material. The manufacturing of Tencel is a process that comes pretty close to completely ‘green.’

While cotton requires more land to produce, a more balanced comparison with Tencel will take into account that cotton is a drought- and heat-resistant plant. Cotton production accounts for three percent of the world’s agricultural water, but supplies about a third of the fiber used in the world’s textiles (Tencel accounts for only a tiny fraction of global textile production). Cotton output has expanded without claiming additional acreage, and impressively, growers are achieving this bump up in production relying less on irrigation water and more on rainfall. So while your favorite cotton sweater may have required more land and water to make than your Tencel blouse, cotton’s admirable qualities must enter the conversation as well. And there is no escaping the chemicals used to make Tencel, whereas cotton is manufactured without them.

In the end, there is little difference in sustainability between Tencel and cotton—you can feel good about wearing a garment made from either fabric.

Tencel and lyocell are the same material. Tencel is merely the branded version of lyocell, much like Kleenex is to facial tissue, or Xerox to photocopy. Lyocell is a form of rayon, which consists of cellulose fiber made from wood pulp.

Tencel Through Time: a Brief History

Where You’ll Find Tencel and Cotton

Tencel has been used in athletic apparel, bedding, and denim since the ‘90s. Now it’s also found in a wider array of clothing, including shirts, blouses, dresses, and pants, that mimic luxurious silks and cottons. While it’s a tad harder to find garments in 100% Tencel, it’s routinely used in soft blends with other materials, including cotton. Beyond clothing, manufacturers use lyocell in various applications:

Because cotton is a natural insulator, it’s a year-round textile. Soft, stretchy, and comfortable to wear, versatile cotton can be woven or knitted into a variety of fabrics, including corduroy, chambray, lace, and velour, to name only a few. It is a top choice for workout clothing, undergarments, sleepwear, and baby clothing. But cotton can be made weatherproof, too: when it is woven densely and a weather-repellent is applied—for example, a wax dressing—the result is “weather-resistant outerwear that remains comfortable and breathable.

Manufacturers use various parts of the cotton plant in applications beyond apparel, including:

In the intervening years since its invention Tencel has gained visibility and enjoyed acceptance in the clothing industry for use in designer and higher-end apparel because of its appealing luster, texture, and drape. In short, Tencel has the look and feel of silk—or even Egyptian cotton—but it’s easier to launder. And the casual observer can’t tell the difference. Tencel may be a serious contender as a luxury fabric hanging next to your finest cashmeres and silks, but breathable, natural cotton is often more affordable—and it will never go out of style.

12 thoughts on “Tencel® vs. Cotton: a Story of Nurture and Nature”