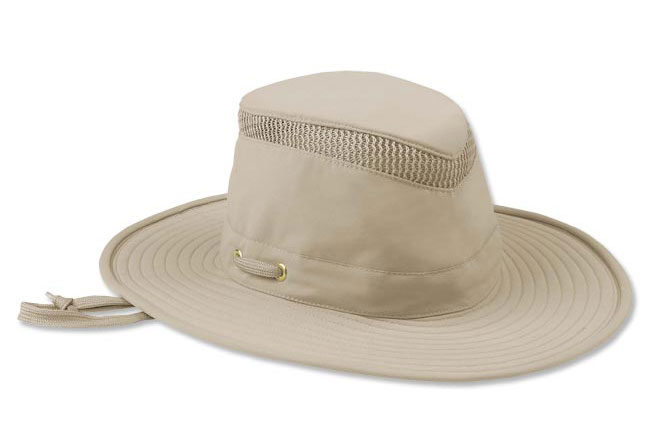 This is the best hat. It packs easily, washes beautifully and gives great protection from the elements. My hat has been around the world. It has been on my head in the Andes, crossing Cape Horn in 100 mile and hour winds, horse back riding in the bioreserve in Buenos Aires, fishing in Alaska, in Mongolia and the Gobi Desert where I was searching for dinosaur bones. Recently it protected me while on Safari in Africa. After all those exciting adventures I unfortunately left my beloved hat under the table in a cave in the South of France after a huge lunch and too much wine.

I was delighted when my new hat arrived just in time for my trip to Machu Picchu and the Galapalos.

Anyone with this hat on their head demands respect. This is a hat for a discriminating person that wants the best in comfort, function and style. Everyone needs a Tilley.
—Orvis Customer “SafariBarbie,” from California

There may be nothing in the entire world finer than a sunny day out on the water—unless, that is, you don’t have a Tilley hat. Whether you’re fishing or sailing, a bad hat is the kind of little detail that can turn a paradise into your own personal…well, not paradise. You step on-deck and suddenly the sunshine, which seemed so fine from indoors, has turned into a face-frying beam, blinding the eyes and torching the delicate skin of your face and neck. You can search for relief under your hat, but if it’s too hot or too tight, it’s sorry relief indeed. And if the hat’s wind cord isn’t comfortable, you won’t use it—which means that the first time the wind picks up, it’ll be gone. And frankly, you’ll be halfway happy to see it go. Until you get home, that is, look in the mirror, and realize that whether you caught anything or not, it appears you brought home a lobster.

As a longtime sailor, Alex Tilley knew that when the wind blows and the waves spit and the sun beats down un-abating, just any hat won’t do. So after he finally found the sailboat of his dreams, he went looking for a hat to match: one with a comfortable, secure wind cord, good ventilation, and a rugged material that would stand up to both heavy wear and regular washing. Finding no such hat existed, he decided he would have to make it himself. Thus, after many designs and lots of trial-wears out on the water (sounds rough, doesn’t it?), the Tilley hat was born. In the end, it was everything Tilley had wanted, and more—so much more, in fact, that he realized that all the features that made his design perfect for sailing made it just as great for travel as well. So if you’re an angler who loves to travel, I suppose you don’t need to hear about Tilley hats. You probably already have one!

One thought on “Tilley Airflo Hat: “Everyone needs a Tilley””