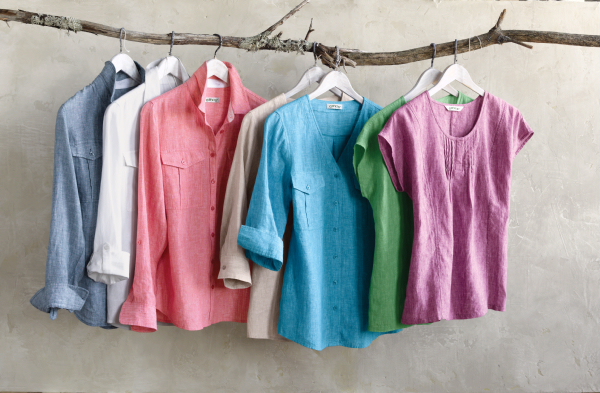 A Sampling of Our Linen Shirts Collection for Women

Everybody knows linen is for summer, but what about the other three seasons on the calendar? And what of wearing linen after Labor Day? Growing up in the South during the 60s and 70s as I did meant adherence to long-cherished cultural norms; many gave way to more modern sensibilities during the social tumult of that era, and that’s mainly a good thing. But traditionalists stood resolute on others, to wit: you should never wear linen clothing (nor summer whites, eyelet, seersucker, plaid madras, or dirty bucks) before Memorial Day, nor after Labor Day. Period. I am sure there were agitators who dared provoke the fashion police back in the day, but most people honored tradition where fashion was concerned, and many do still. It’s a big ship that moves slowly, the American South.

Funny thing is, in the here and now—a time characterized more often than not by fashion anarchy—people still care about when and when not to wear linen, and not just way down south: a quick Google search on the subject speaks to this. And lest we prompt Emily Post to roll over in her Victorian dress, I decided to consult, well, Emily Post (or at least her legacy of decorum disciples). The bottom line: the color’s the thing, not the linen itself. Nor has linen clothing ever been placed in the same box with summer whites or accessories: turns out we’ve self-imposed that sanction all along. (Imagine the missed opportunities.)

Has Your Linen Clothing Put On Weight? Blends Are Heavier
Some would submit that size matters—or at least the heft of the fabric: new linen blends (linen/rayon is an excellent example) stretch the limits of seasonal wear. And while wearing linen in winter may push the envelope in some climates, heavier linens in appropriate colors (think khaki, navy, brown, or black) certainly make themselves wearable right into the fall. It’s the same paradigm as keeping tropical wool in service during warm-ish months—it looks natty, drapes beautifully, and wears comfortably, especially in an air-conditioned office environment. But exercise due caution: pairing a white linen blazer with a thin, pastel linen blouse in the dead of winter is tantamount to wearing your fairy costume or Superman jammies to kindergarten because your mama said you could. Don’t be a dork: dress reasonably for the season.

What is Linen? Versatile Fashion for Mummies and More
Enduring and primordial, linen is a breathable textile woven of fibers from the flax plant. And it’s true: ancient Egyptians used linen to wrap mummies before placing them into sarcophagi. The word itself—linen—found its way into English from the Latin linum, whence comes line, where a linen thread was used as a standard to describe straightness; lingerie, once made of lightweight linen; and lining, referring to the innermost linen layer of composite garments (e.g., jackets). The manufacturing process is complicated and time-consuming, but the über-absorbent nature of the fiber makes the finished product desirable for its cooling properties in the heat, and that is the provenance of its warm-weather appeal. In short, linen clothing is comfortable to wear in hot weather, fashion dogma be damned.

There’s No Uncrumpling That Rumpling: Roll with Linen’s Wrinkles
Consider it a character flaw if you must, but you’ll be a more content fashionista just to embrace it. Linen creases and creases, and keeps on creasing the more you wear it. Try to achieve a higher state of consciousness: consider the possibility that linen clothing looks best when it is beautifully rumpled. Wear linen joyously, and make your peace with the crease, Grasshopper.

But should you insist on crispness, try these tips for erasing all the wrinkles from your linen clothing:

• Set your iron to the highest heat, and turn on the steam.
• Wet a cotton bar towel (not terry cloth) or a cotton T-shirt: soak it through, but wring it out so it’s not dripping wet.
• Place the damp towel or tee over your linen garment and iron the whole business.
• Et, voilà: the result will be smooth, unscorched linen, courtesy of the moisture.

You’ll look neatly pressed for a solid five minutes, at least. Then enjoy the changing nature of your wrinkly blouse or rumpled trousers, all the livelong day. 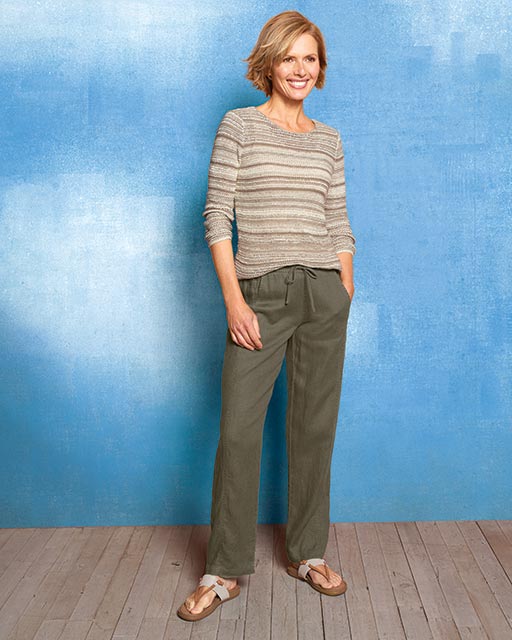 Pushing Boundaries: Wear Linen in Spring, Summer, and Fall
It’s time to come out of the closet. Nudge, cajole, even browbeat it if you must: go on and wear your linen clothing after Labor Day—it’s appropriate for half the year or more, in many climes. Exhibit A: a lightweight cardigan or jacket paired with your favorite linen blouse sees you through spring to summer. Exhibit B: when fall rolls around, swap light colors for darker ones, and tissue-weight tops for heavier linen blends. Limited only by your imagination and tastes, fine linen garments will do your bidding.

Emily Post has your back: beautiful and ever-adaptable, linen clothing was never just for summer.

12 thoughts on “When to Wear Linen: Taking Summer’s Favorite Fabric Out of the Closet”