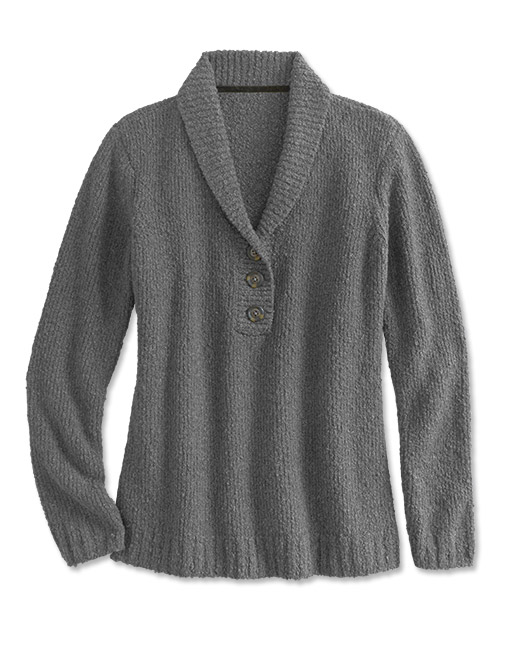 “Excellent quality and fit. Wore it for an evening out and yet it would go just as well with jeans.”
—Cheyssiol from Perthshire, Scotland

The run-up to the ringing in of 2015 had me thinking about how I want my life to be. As the New Year unfolds, laden with hope and promise, my focus is on what really matters. I want to clear the cobwebs and clutter, inside and out. To distill, to simplify. To get back to what’s essential.

I’m relaxing by cooking real food. The chopping and hand-mixing slow down my blood. I’m boxing unused household items for donation. I’m seeing beloved knick-knacks and tools with fresh eyes, as the few emerge from among the many. And I’m dressing with ease. Ah, sweaters! Is there anything better than donning your favorite oversize, slouchy boatneck that not only feels like a warm embrace, but flatters your shape and size, as well? Mine, worn with neat leggings, is the perfect hostess outfit for a lazy Sunday brunch gathering. Comfortable, yet pulled together. It makes me feel a little bit Jean Seberg: Bohemian and chic.

There’s a reason why the maxim “it’s as comfortable as an old sweater” enjoys its well-worn status. Everyone relishes the familiarity and freedom sweater-dressing offers. I revel in wearing “boyfriend sweaters,” though I have to admit my age and confess that mine are actually “husband sweaters.” There’s magic in the way these pieces, not knitted for our gender, instinctively reveal and conceal the curves of the female body to their best advantage. And the double-secret bonus is that the sweaters belong to men we love: They smell like them. Occasionally, if we’re lucky, our men’s sweaters come to us still warm from their bodies.

This tradition of wearing boyfriend sweaters dates back to when women’s sweaters were not a part of fashion’s canon. At the turn of the 20th century, sweaters for women were worn only for serious sporting activity, and were largely functional, borrowed from haberdashery. During the roaring twenties, in the age of the flat-chested, slim-hipped garçon silhouette, updated menswear-inspired sweaters for ladies began to make their way into boutiques.

It wasn’t until the 1930s and ‘40s that feminine sweaters intended for women experienced a heyday. These gaily colored confections, with pearl buttons, sequined appliques, and nipped-in waists laid the groundwork for one of fashion’s formidable icons: The Sweater Girl.

As sweaters debuted in tighter, softer weaves during the 1940s and ‘50s, they were paired with architectural foundation garments such as the bullet bra favored by Hollywood actresses such as Jane Russell, Lana Turner, and Jane Mansfield. The freedom and stretch of the knits accentuated women’s curves in ways that starched shirtwaist dresses never had before. This moment in fashion history married effortlessness with perkiness.

Sweaters mirrored society by the 1960’s, taking on a casual air. The dawning of the age of the unstructured beatnik look stamped out any buttoned- and belted-up looks of past decades. Women’s sweaters took yet another left turn in the ‘70s giving way to a sleeker, more modern and sophisticated line. By the ‘80s, women had a choice; they could be blowzy and sexy, in an off-the-shoulder number à la Jennifer Beals circa Flashdance, or Wall Street-powerful like Melanie Griffiths after she found her inner business-woman in Working Girl.

Each time I select a favorite sweater from the closet, or unfurl one from my cedar chest, I’m comforted by the fact that the choice is uncomplicated. From my most treasured liquid, luxurious cashmere cardigan, to my nubbiest, most androgynous Aran wool pullover, to my classic black, ribbed turtleneck, I know I’m in good hands.

These old friends and sparkly new acquisitions are classic as they are comfortable. I pull one on and I’m worry-free. I exude nonchalance. I know I look good. As I was told in acting school, “Put your costume on, then don’t fiddle with it.” That’s possible with a sweater. No need to fuss.

In essence, sweaters are simple, in the best sense of the word. Simplicity is something I want more of. “Back to basics,” is my motto. How will you streamline your life in 2015?