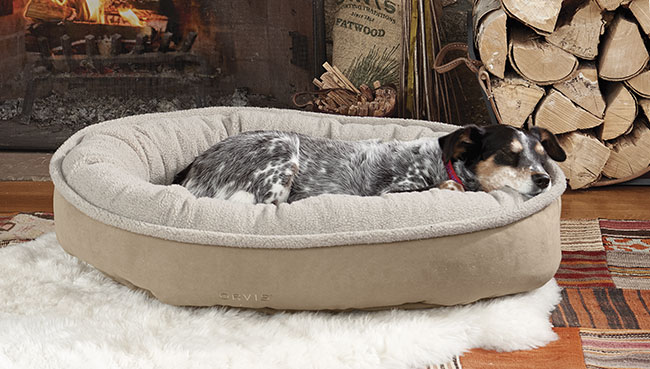 “A excellent bed, well made, value for money. My chocolate Labrador and my cocker spaniel nestle up together in this comfortable bed. A Christmas treat for them. I have bought many different beds over the years but Orvis is the best, their dog beds are so well made does not matter how many times they get washed they last forever. . .” —Huckleberry12, North London

If you’re a dog person, like I am, it’s likely you consider your canine companion to be more a member of the family than a pet. Friends have said to me, “In my next life, I want to come back as one of your dogs. They’re lucky to have landed with you.”

I view the situation from the opposite perspective. I think I’m blessed to have found Piglet and Mo, and luckier still that they have accepted me, my husband, and my kids as pack members. I stand by the motto, “A house isn’t a home without a dog.” For my money, there’s no way to measure the priceless feeling of being greeted at the door with excited whines, tapping toenails, and welcoming nibbles after a tough day of being battered by New York City. To my dogs, I’m one of the best things they can imagine. I’m the highlight of their day. That feels good. I like being loved.

If I felt the need to justify the money I invest in keeping my cherished, elderly dogs in kibble and paying their vet bills, I’d mention that science has proven that owning a dog—or as I prefer to frame it, “cohabitating with a furry friend”—improves one’s mental and physical health, and prolongs one’s life. Decades of studies have supported these assertions, and recently the venerable American Heart Association has weighed in with conclusive evidence. According an article in Harvard Health Publications from the Harvard Medical School, “dog owners are more likely to exercise, have a better cholesterol profile, have lower blood pressure, be less vulnerable to the physical effects of stress, and be more likely to survive a heart attack.”

While I admit that these findings are compelling, I’ll confide to you that I didn’t need quantitative data to prove that living with dogs makes life better. My gut knew before my head. I took it on faith that I get more from having dogs than dogs get from having me.

When I was a school girl, my family lived briefly in the mountains of Eastern Kentucky, in the same “hollers” that inspired Loretta Lynn, the celebrated Coal Miner’s Daughter, to write soulful ballads about the beauty and challenge of hardscrabble rural life. My family was just visiting; we passed briefly through as my father paid dues on the way up his white-collar ladder.

Still, we played by the customs of the locals. For instance, my beloved first dog, Chester—a formidable sable-and-white Sheltie found alone and tangled in the brambles up our back hill by my teenaged brothers—slept in the garage, not the house. I remember ducking out through the kitchen in the cold twilight of winter to sneak scraps to Chester, crawling onto his pile of old blankets under the workbench to hug him around the neck. I was not of my parents’ opinion that a dog’s station in life is a rung below that of a human’s.

Our neighbors, The Sheridans, bucked this convention. Flouting the norm, they lavished their regal, penny-colored Irish Setter, Lady, with the first proper dog bed I’d seen, positioned on the screened in porch at the back of the house. This arrangement made perfect sense to me as a child. Lady was their baby. In retrospect, through adult eyes, I see that Lady’s status may have been earned rather than given. I recall the thrill of visiting Lady’s 12 fat-bellied yipping pups (Yes, I said 12, Lady was a large dog!) when her first litter was born. Over time, they disappeared in ones and twos to new homes, presumably for a tidy price. Clever Lady had the ability to sing for her supper, as it were, and in return garnered a soft bed on which to lay her weary bones.

I require nothing of my dogs. Still, they enjoy a variety of pleasures and comforts such as full access to the sofa, frequent and expensive trips to the groomer, and a full range of doggie outwear, including, but not limited to, snow boots, raincoats, turtleneck sweaters, and t-shirts emblazoned with pithy witticisms such as “Here Comes Trouble.”

We are terrier folk. Our boy Piglet, a Bedlington Terrier, was our wedding present to each other nearly fourteen years ago. We chose the mellow but sporty breed for its hypoallergenic coat, gentle nature, and longevity. Our outstanding, ethical breeder insisted we get a “donut” before we brought him home. He curled in that green, fleecy safe haven until he outgrew it. Since then, there has been a parade of large dog beds through our lives, each one a slight upgrade to the last. Piglet is a medium-sized dog with king-sized tastes. Suffice it to say, he likes to sprawl. Now that Piggy is in his twilight years, his comfort and contentment are paramount.

We rescued our second dog, Mo, a swaybacked and snaggle-toothed Schnoodle, on a whim. While shopping on New York’s Upper West Side on the first warm day of spring two years ago, my children asked if we could swing by a Dog Adoption event at a local pet store. I answered, “OK, but we’re NOT getting a dog,” as if that option had ever been on the table. We were told Mo’s tale — his family had dumped him and his elderly “dog brother,” a Lhasa Apso, at the shelter. When his brother was rescued, Mo reportedly howled for two days. My advice? Never swing by a Dog Adoption event.

We were told Mo was six. The vet estimates that he’s 12. After he loosened up from the shock, relaxing and trusting us, it was revealed that he’s nearly deaf, and all but blind. He has a skin condition, and cannot chew dry food. No matter. He’s ours. He was meant to be. He sleeps most of the day, curled in his “Mo-nut,” a secure little bed into which he folds himself efficiently and elegantly. He’s protected. He’s one of us now. We belong to each other.

My dogs bring me joy. Whether it’s in the form of a zen-like feeling I get from walking them around the block, compelled to take life moment by moment as they sniff and greet local pooches, or the warmth on my hip as one snuggles under my throw while I read a novel on the couch, or the adoration in their faces as I throw open the front door after a long day away, they make my life better. Doubters can insist that my dogs have the life of Riley all they like. I know the truth. Our being in a pack together is a bigger win for me than it is for them.