Here are the. . .uh. . .”athletes” who will be competing in this year’s Orvis Turkey Pool. Read through their bios and look carefully at the photos. Can you gain any insights into who might be the hot trigger in the woods this May? Whether you use some sort of elaborate formula or just go with your gut, choose one favorite and then go vote to be eligible for the prize drawings. 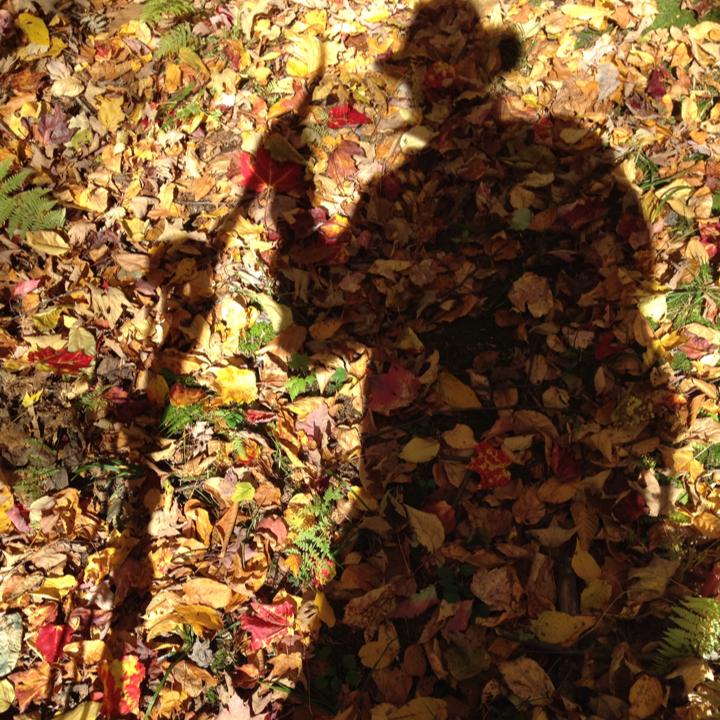 Turkeys expect shotguns. So I shoot sticks out of stick bows, and it scares them to death. 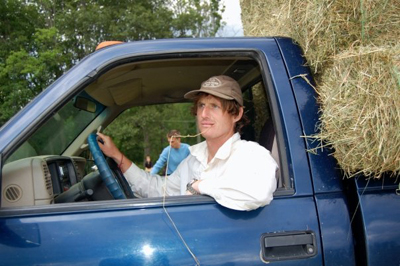 Reid trying to spot turkeys from the hay truck.

You have no good reason to think Reid Bryant will win the Turkey Pool, as he’s new to the area and suffers from a fatal combination of restless leg syndrome and ADHD. That said, he’s one of the better roadkill scavengers in western New England, and you’d be amazed at how accurate his 4-Runner is. 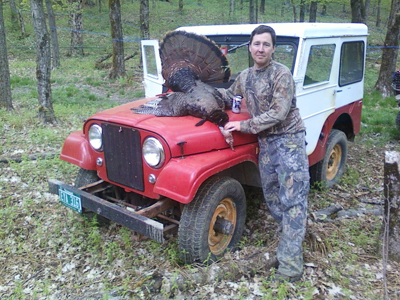 Mission accomplished. Can Jon do it again?

May is a great month to be in the woods. While turkey hunting, I’ve had very close encounters with moose, sow bears with cubs, fisher cats. and had various migrating songbirds land on my gun barrel. I enjoy doing long death marches while turkey hunting to see if I can wear out whomever I’m hunting with. Why will I win? It’s been a long time since I have won, so I must be due! 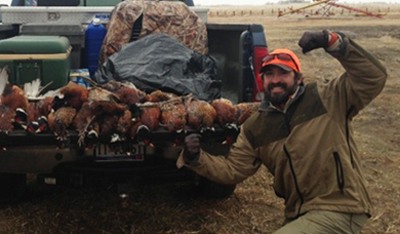 Brett is hell on pheasants, but how about bigger birds?

Why I will win the Turkey pool: In the immortal words or Ricky Bobby “If you ain’t first, you’re last,” so even if I have to tag my bird at the supermarket I will do what it takes to win. I possess the determination of Rocky, the stealth of a ninja, the shooting skill of the Lone Ranger, and the “if you ain’t cheating, you ain’t trying” attitude of Madden. 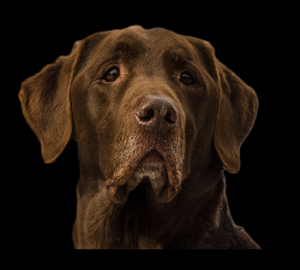 Pickett doesn’t have much faith in his master. Is he right?

Pickett says: “My master has published stories on turkey hunting. He can write about them all day. He just doesn’t shoot one very often. I wouldn’t vote for him.” 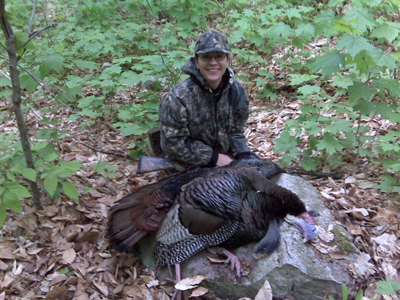 That’s the smile of a woman who likes to show up the boys.

There aren’t too many things cooler than an early morning hike to the top of the Mountain, finding your spot and sitting there quietly as the world wakes up around you……then, if you’re lucky, all hell breaks loose and the quiet is shattered by a distant gobble, your adrenaline starts pumping, your heart starts pounding and you think you might puke…. THAT is turkey hunting. And it’s all mine this year BOYS! 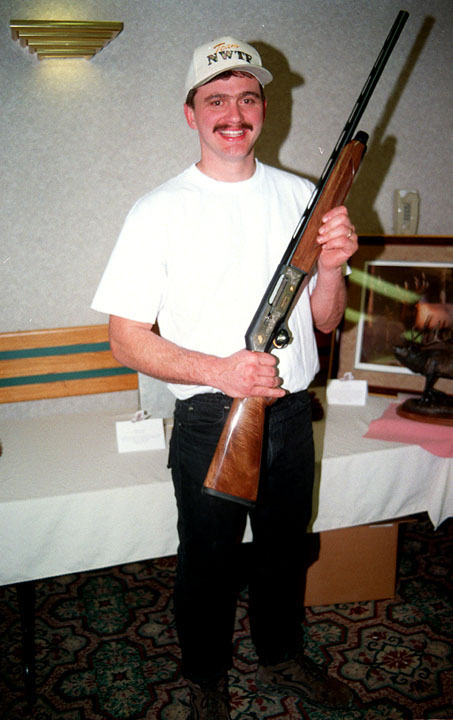 Norm’s got the hat. Is that enough?

Nobody thought the IT guy at Orvis could win it. Well, the IT guy shocked the Orvis world by winning the pool two years in row. Now it’s time to win it again! 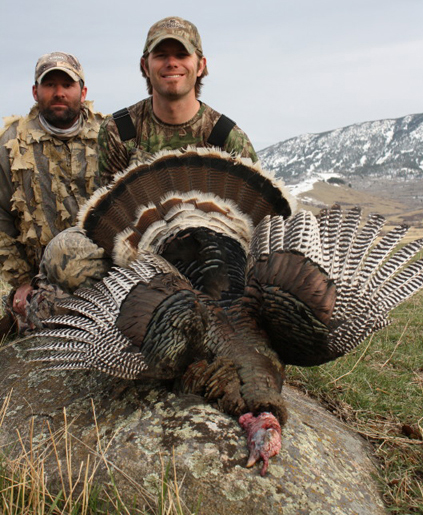 Steve is from Missouri, which some folks see as an advantage. 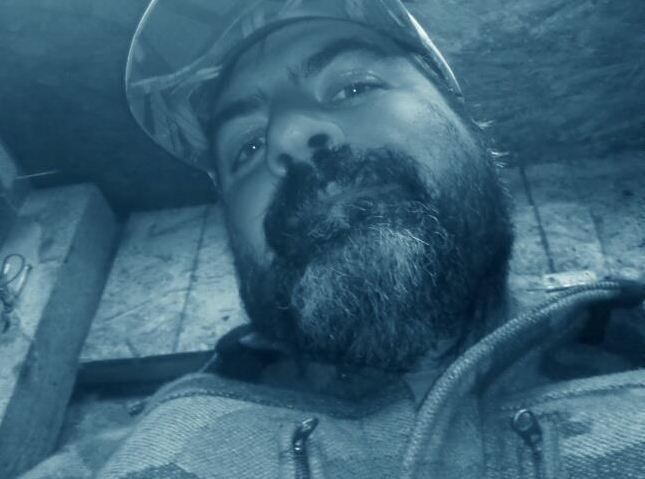 Can the man from the Great Plains show these mountain folk up?

I am what Vermonters call a “flatlander.” I have come to realize that the connotation is less about topography or altitude and more about perceived beliefs. As a non-native who once lived on the flat lands of the Nebraska prairie at an altitude roughly 2,800 feet above the highest mountain in the immediate area, the only belief I will share is that these birds appear malnourished. It may be more effective to set up a food truck. As a first-year Orvis Turkey Pool competitor with several thunder chickens under my belt, I am confident I can represent the corn-fed, hopper-chasing turkey heartland. The turkey choke is set, gun patterned, and favorite call tuned. I’m ready to get rowdy sitting there real still against a tree, ears peeled, lookin’ for old beady eyes.

This Maine boy is at home in the woods in any season.

I’m a Maine boy who came to Vermont and learned by trial-and-error how to hunt turkeys over the past 25 years. I’ve had many more trials and errors than successes…but then that’s why I love it so much! Let’s go get em!! 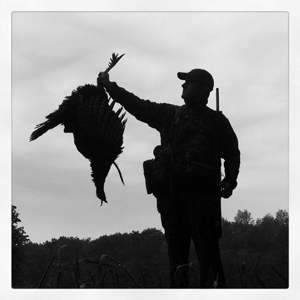 Seven years in a row is a pretty good streak.

I started hunting turkeys seven years ago, and I fell for it bad. I have managed to bag nice Toms in Vermont each year since then, along with birds in Wyoming, Massachusetts, and New York. I have been lucky enough to win the Orvis Turkey Pool two times outright and was a co-winner last year. At first, my wife didn’t like my early mornings, but now she sees how miserable I am when I stay home, so she kicks me out of bed. Over the last four years my average days hunting in May is in the low 20s. . .I am rather persistent. 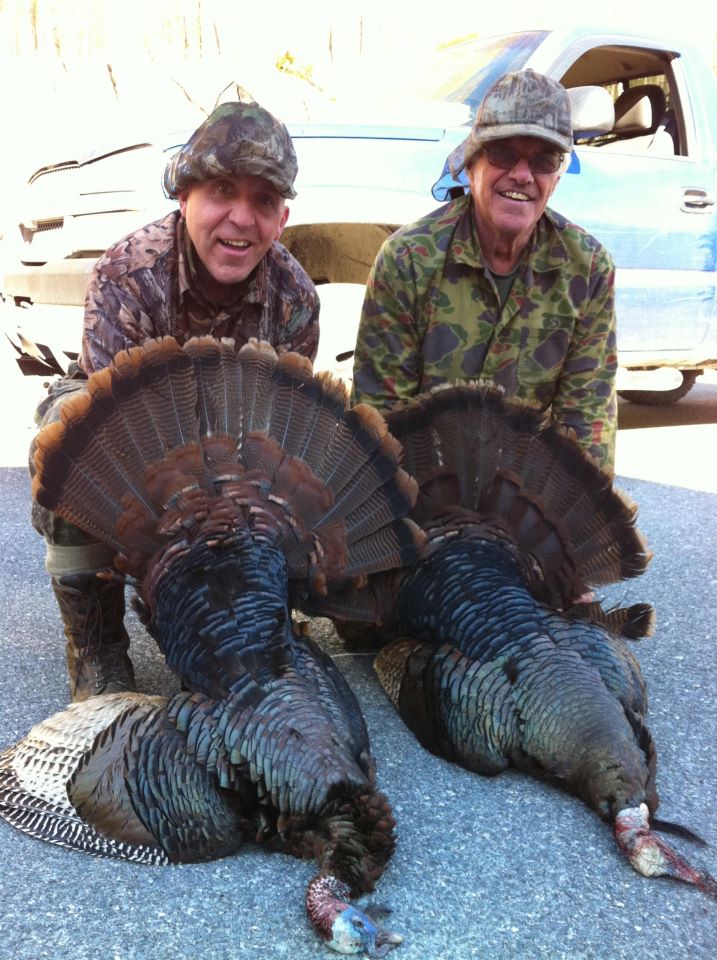 Leigh seems to have a surfeit of confidence. 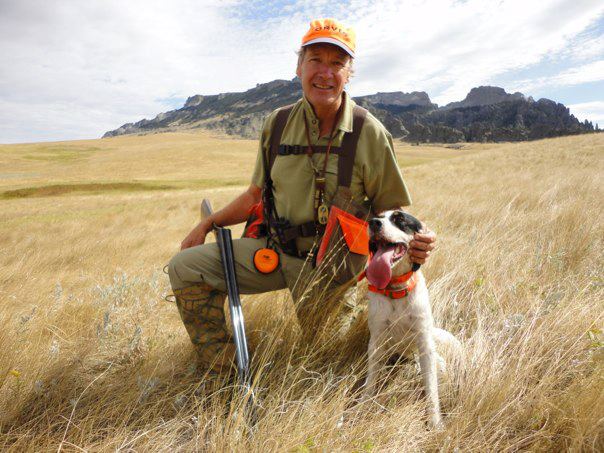 Dave likes to sleep late and shoot the lazy birds.

I will win because I am older and, therefore, wiser. Hopefully that trumps the young bucks who can get up a 4 a.m. more consecutive days than me and not fall asleep in a meeting at work. 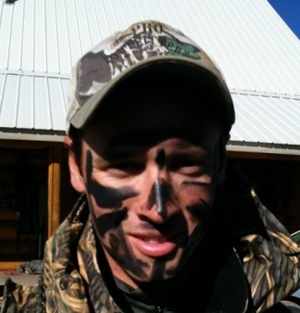 Simon has the look, but does he have the luck?

For the last 15 years, I have dedicated myself to studying and mastering every possible to way not kill a bird during turkey season. I am 99% sure I have them all covered and intimately understood. You can’t argue with those numbers. I am a shoe-in to win this year. 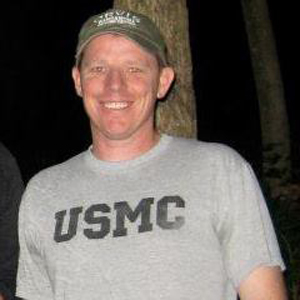 A man of few words, but that t-shirt might be relevant.

I’m an Orvis web merchant and a turkey rookie.

Does duck savvy translate to turkeys?

Andrew Pierce is new to turkey hunting, but he’s an avid grouse and duck hunter. He is eager to bag his first turkey this year and hasn’t been shy about glomming info from the more experienced turkey hunters in the office. 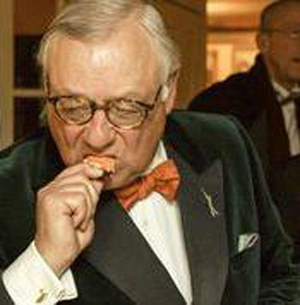 John models our newest line of camo for 2015.

Vote for me. I am not the most accomplished turkey hunter, but I have a secret weapon. My hunting partner is one of the very best turkey hunters here at Orvis, and he will let me take the first bird. And he always gets into big birds. 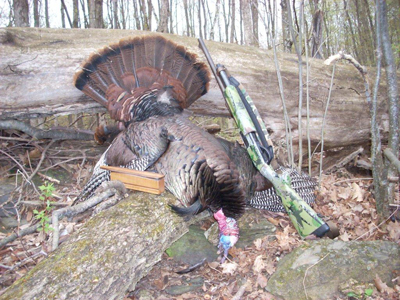 This one was a winner. Can Jordan do it again?

It is obvious I’ll win because I have the best looking shotgun. [Editor’s note: Jordan is the company Gunsmith.] 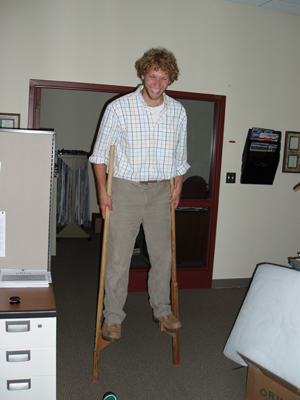 I started hunting turkeys a few years back and have bagged one bird since—so the odds are with me to get one this year. Take comfort in knowing that I’ve heard a ton of them and screwed up many a hunt, and that counts for something. A vote for me means you put this guy in the woods and I’ll hunt for you 24/7. That’s 24 minutes a day, 7 days a month.

What rhymes with “Bruce”?

I started hunting turkeys when they were first introduced in Vermont (not sure of the year, but it was in the late mid 70’s). We had no idea what we were doing and, after a long learning curve, I got my first bird in 1983. Since then, I’ve been lucky enough to put many nice birds on the table. Whether I get a bird or not, the biggest reward for me is being in the May woods. Anyone who hasn’t experienced being on top of a mountain during the pre-dawn hours of May is missing out on one of Mother Nature’s greatest gifts. 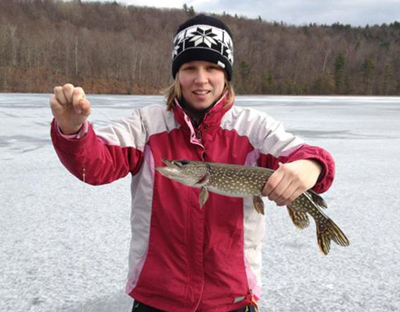 Heather is ready to show her dad and husband who is boss.

As a young girl, I loved going out hunting with my father, and now I enjoy competing against him and my husband. I’ll rule the roost.

How big are the spurs on that thing?

I’ve been preparing for this tournament for months – I can find every fish in every lie on a 10-mile stretch of the. . .Wait, this is a turkey pool? It starts when?!