Written by: by Ted Fauceglia 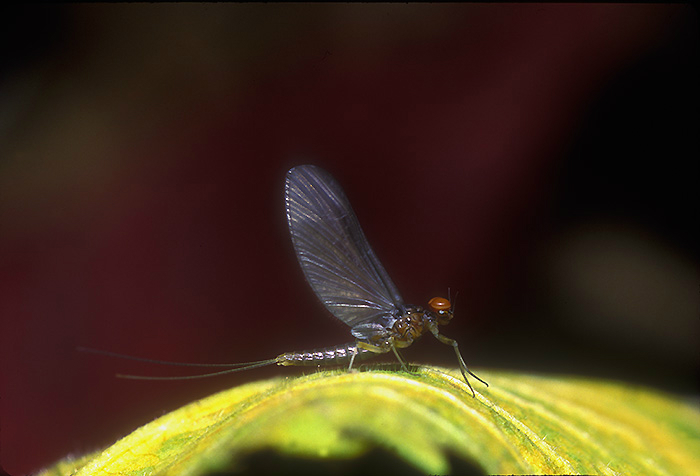 If you queried any ten fly fishers about which mayfly hatches they prefer and why, you’d probably get ten different answers. The reason is simple: mayflies share as many differences as they do similarities. Notwithstanding the fact that most species of mayfly nymphs live within inches of each other, their hatching behaviors and adult colors vary significantly, and these differences ultimately influence our patterns and methods of presentation. I’ve been fly fishing mayfly hatches and photographing the various stages of the mayfly life cycle for the majority of my adult life, and if I had to pick three favorites, I’d choose blue-winged olives, sulfurs, and Tricorythodes.

The BWO
Olives, sulfurs, and Tricos share common traits and characteristics with most of their fellow mayflies, but they also have developed unique differences. Blue-winged olives, for example, defy adverse weather conditions. Their minute size belies their steadfastness. Whether it’s 35 degrees in the middle of February or 95 degrees in the middle of July, if it’s time to hatch, the duns get on with it. When the time is right, the nymphs leave their underwater nooks and head for the surface. The signal to hatch seems to lie in their microclimate. To the Eastern dry-fly aficionado, olive hatches are synonymous with cold and rainy days.

In addition to their resolve to complete their life cycle despite the weather, olives can produce as many as four broods per year, an added quality that seems to have been designed to accommodate dry-fly fishing. Several streams in central Pennsylvania have nearly continuous olive hatches, and size 20 olive duns can occur any time in January, February, or March. These hatches are short-lived but dependable; they coax the trout out of their winter lethargy and produce cold but enjoyable dry-fly activity. These early winter hatches precede several more blue-winged olive broods that occur in each successive season. As Ted Leeson notes in The Habits of Rivers, “Where the great number of aquatic insects that interest fly fishermen undergo but one emergence a year, the blue-winged olives just keep laying eggs and growing nymphs and hatching flies and feeding trout, heedless of calendars, even in winter.” 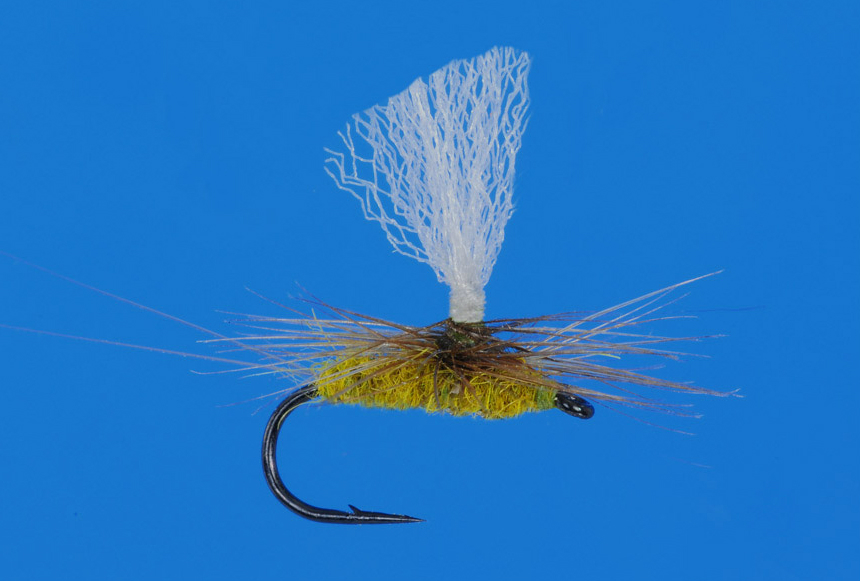 Blue-winged olive duns are also beautifully colored little creatures. In flight, the diminutive duns can easily be mistaken for ordinary gnats, but up close, their colors are quite remarkable. The males look like they were outfitted at Brooks Brothers. Their upright wings, which come in opaque shades of blue gray, rest on drab, olive-brown bodies. Female duns bear similar but softer, more subtle colors. As if to show their nervous spirit, both male and female olives briskly wag their two tails back and forth when at rest.

Olive hatches rarely fail to produce rising fish, but the trout are fussy. Because the duns hatch throughout the year, the trout are obviously familiar with them. To successfully fish olive hatches, you must have the right pattern tied in the correct color and size. Proper presentation and fine tippets are also critical. But fooling healthy, selective trout on a size 20 Parachute Olive is about as good as it gets–especially in the dead of winter when the air temperature hovers slightly above freezing.

Sulfurs
While the blue-winged olive’s ongoing presence is the result of successive broods, extended sulfur hatches result from a different phenomenon. In the East and Midwest, up to four different sulfur species occur in succession; two species occur in the West. But from the trout’s and the fly fisher’s perspective, all the species look alike, with the same basic coloration. Size is the main difference. Depending on the region and the stream, the shades will vary, but all sulfur species have soft gray wings and light yellowish bodies. In the East, sulfurs are known as pale evening duns. In the West, they’re better known as pale morning duns. Sulfur hatches begin in early May and stretch into late July. 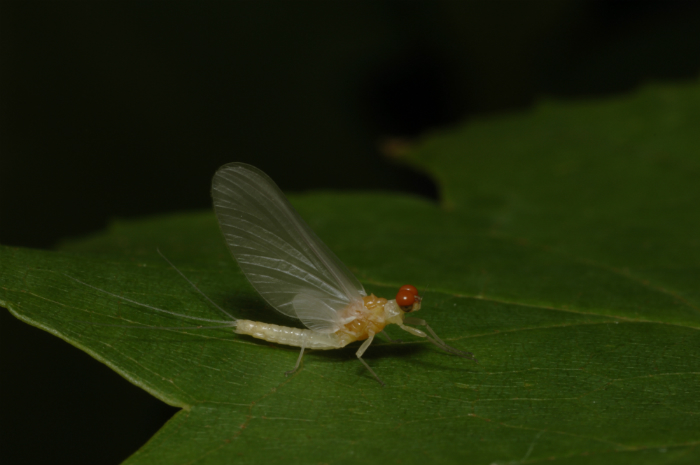 Trout can be both wary and finicky during sulfur hatches, which makes for technical fishing.

Technically, sulfur hatches present challenges that other hatches do not, especially during a spinnerfall. At about 8:30 in the evening, when sulfur spinners are on the water and a pod of noisily rising trout are within five feet of where you’re standing, figuring out what the fish are taking can be difficult. At times, it’s almost impossible. While one pattern tied in different sizes will usually work for both male and female sulfur duns, male and female sulfur spinners bear significantly different colors. Males require a rusty dun pattern; the female spinners have cellophane-clear wings and whitish yellow bodies. Furthermore, the trout will, at times, show no interest in a standard fully spent spinner pattern. Instead, they will look only at a spinner pattern with upright wings or with semi-spent wings, or a drowned pattern. This compounds the problem because sulfur hatches overlap, which forces you to carry all the patterns in different sizes.

To make matters worse (or better, depending on your perspective), as the sulfur hatches progress, water levels usually go down. Not only have the trout become familiar with the naturals, but they have lost their protection cover, as well. Familiarity compounded by wariness magnifies their selectivity. Twelve- to14-foot leaders tapered to 6X or 7X are a must. Ironically, the trout will ignore your presence, but they will not even look at a dragging fly. And if you “line” a fish, it will slowly drift out of sight. 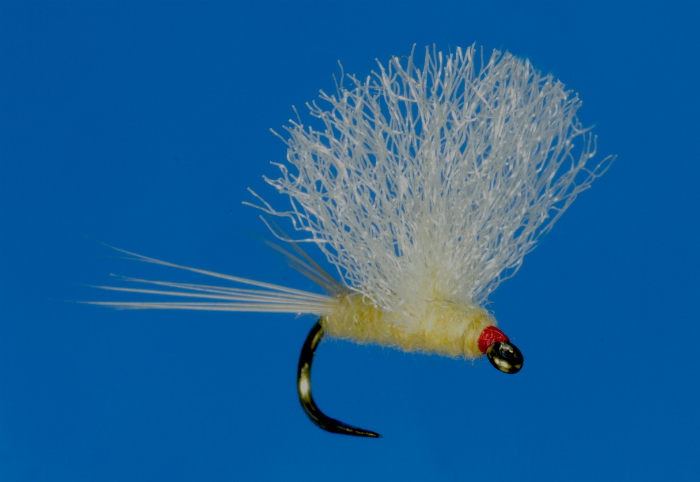 Despite all the challenges that sulfur hatches present, I look forward to fishing them. In many respects, they are the highlight of the dry-fly season. To achieve even a modicum of success, you need a basic understanding of their life cycle, the right combination of patterns, and great patience. If you can’t handle refusals, don’t fish sulfur hatches–especially the spinnerfalls. I don’t measure success by numbers because if I did, the trout have a big edge on me.

In essence, sulfur hatches and their like are what make fly tying and fly fishing fun. I enjoy tying flies and trying to create new patterns. Success does not lend itself to innovation; failure does. And to be honest, my sulfur failures far outnumber my sulfur successes. The failures that I have endured while fishing sulfur hatches have led to more experimental patterns–such as my Knotty Parachute and emerger patterns–than any other hatch.

Tricky Tricos
Tricorythodes hatches are unlike those of any other mayfly. Most mayfly hatches take place between 10:00 a.m. and 2:00 p.m. Trico hatches end by 10:00 a.m., but the hatch starts the preceding night. Sometime after sunset, the males emerge and travel to streamside cover, where they molt and wait. Trico females emerge about 12 hours later, just before sunrise. Immediately following their emergence, the females molt into spinners. With the discarded shucks still clinging to many of their abdomens, the females return to the water, where they fly up and down, waiting for the males to join them. When the males arrive, they hook up with the females and mate. After mating, the males fall to the water and expire. Shortly thereafter, the females descend to the water and drop their egg sacs. Having completed their mission, the females join the males. By about 10:00 a.m., the mating and egg-laying process ends and the hatch is over. 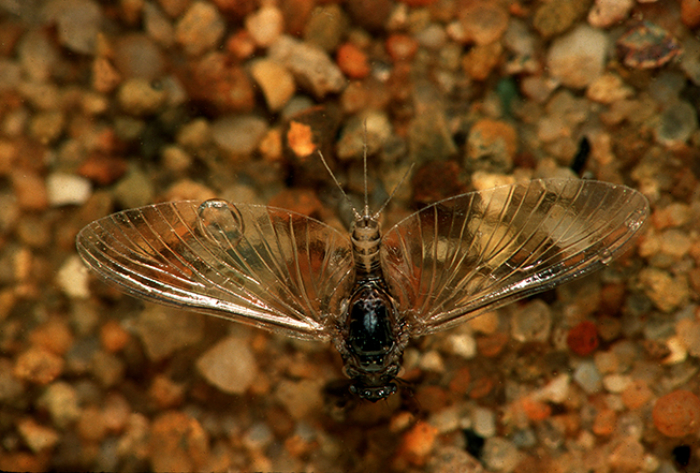 Tricos provide some of the best late-summer dry-fly action..

Like olive and sulfur hatches, Trico hatches last for several months. In the East, the hatches start in late June and extend into early November. In the West, Trico hatches start in mid-July and can stretch into October. Literally thousands of spinners appear daily. The accumulation of undulating spinners from single day’s hatch often reaches such high numbers that the mass can easily be mistaken for a moving cloud of fog. When that many spinners hit the water at the same time, the trout react immediately; they gulp the spinners down in bunches. In the backwashes and the side eddies, the spinners blanket the water. In these areas, the trout cut through the drowned spinners with their mouths open, gulping in as many spinners as possible.

From the time I first began chasing trout with flies, Trico hatches have had my attention. I remember reading Chauncey Lively’s article on Trico hatches in the Pennsylvania Angler. In the article, he was particularly excited about the massive Trico spinnerfalls that took place daily on the Falling Springs creek near Chambersburg, and how the huge wild brown and rainbow trout freely rose to them. A picture of the natural and his Trico pattern accompanied the article. 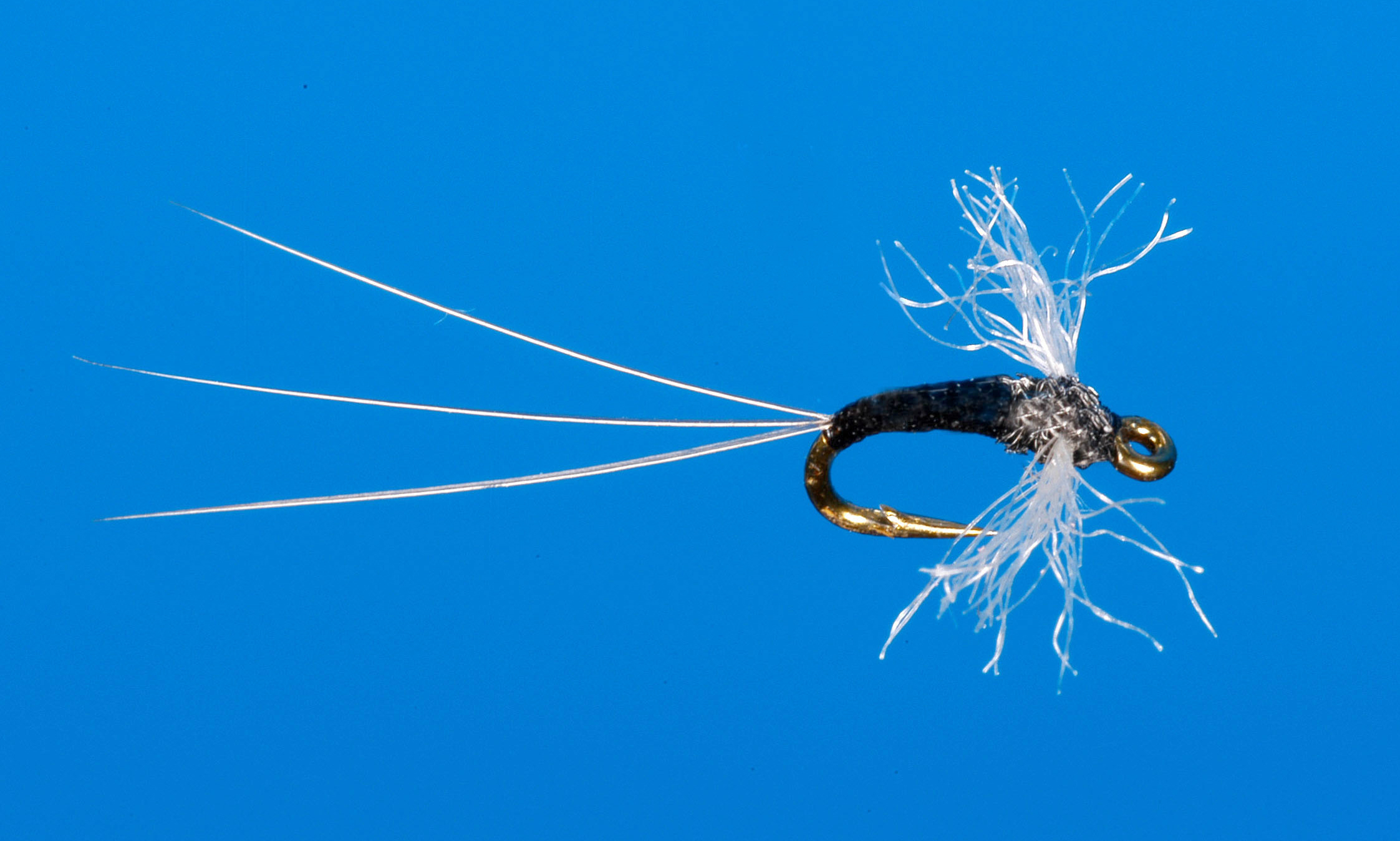 Falling Springs is one of the classic Pennsylvania limestone spring creeks, and I couldn’t wait to fish it. When I finally did get there, I wasn’t disappointed. Just as Mr. Lively had claimed in his article, the spinnerfall happened on schedule; it was massive, and the trout responded aggressively. In the midst of a small pool full of rising trout not more than 50 yards from the road, two of the largest brown trout that I have ever seen rising to floating mayflies were feeding within 10 feet of me. Lying side by side, the two behemoths were suspended about six inches below the surface. Without any fear of or concern for my presence, they rose to every passing Trico spinner that floated through their window. A hollow clank rang out at the end of each rise as their oversize upper and lower jaws smacked back together. I watched as the two carnivores, both in excess of 25 inches long, fed on tiny size 24 Trico spinners in a stream no more than 30 feet wide. When spinners stopped coming, they both drifted out of sight. It’s an enduring image.

Contrary to my normal instincts, I never made a cast. Just as Chauncey wrote, the Trico hatch was massive and big fish ate them, but I wasn’t about to spoil their meal. Tricos have been one of my favorite hatches ever since.

Ted Fauceglia is the country’s foremost photographer of aquatic insects, and he writes the “Natural Reflections” column in each issue of American Angler. Ted is also an FFI Certified Casting Instructor, the author of Mayflies (2004), and he has provided the bug and fly-pattern photography for dozens of books.